India is actually a red-hot investment opportunity for its clean energy transition, top US official John Kerry said on Thursday as he praised Prime Minister Narendra Modi for his commitment to addressing the challenge posed by climate change which the Biden Administration believes poses an existential threat to humanity.

"We believe India can be one of the most critical transitional countries in this entire endeavour. I am confident that just as we have worked very closely on any number of issues in these last years, our two nations -- the world's two biggest democracies -- have a great deal to gain from joining hands in our global leadership and confronting the climate crisis to meet this moment," he said.

"India is actually a red-hot investment opportunity for its clean energy transition," Kerry, the first official on climate to be inside the US National Security Council, said in his address to the World Sustainable Development Summit 2021.

Looking forward to visiting India soon, Kerry said that the prime minister has made a very important contribution to this dialogue. Needless to say, India is deeply committed to this challenge and it has been for a considerable number of years, he said.

"You are indisputably a world leader in the deployment of renewable energy and your leadership of the International Solar Alliance, which Minister Jaishankar referred to, is absolutely critical for not just India, but for other dynamic, growing economies in the world, Kerry said.

Prime Minister Modi's announcement of a target of 450 gigawatts of renewables by 2030 is a strong, terrific example of how to power a growing economy with clean energy, and it's going to be one of the most important contributions because India today is already the third largest emitter in the world behind the United States and China, he said.

Referring to a latest report of the International Energy Agency, he said India's down payment on the clean energy transition puts it on pace to become the global market leader in solar and storage by 2040. "And thanks to your rapid scale-up, it's already cheaper to build solar in India than anywhere else in the world. That kind of urgency is exactly what we need in order to confront the crisis that we confront today," he said.

After coming to power, the Biden Administration has quickly established contacts with the Indian leadership. The leadership of the two countries at the top level have known each other for long and have put the relationship on fast-track. In a recent interview, India's Ambassador to the US, Taranjit Singh Sandhu, had identified climate change as one of the key pillars of collaboration between the two countries.

It was one of the topics of discussion between Prime Minister Modi and President Joe Biden earlier this week and also when they spoke in November soon after the US election results were announced.

In his speech, Kerry made it clear that India is a key partner of the US under the Biden Administration and would take it over from where the relationship was left by the previous Trump Administration.

On climate change, Kerry said that he knows that Prime Minister Modi is committed to this and seized by it, and so are Indian businesses.

"I was also very heartened to see the recent government budget focussed heavily on clean energy and propose a very specific hydrogen energy mission, he said.

By 2030, the International Energy Agency forecasts that if India drives even more aggressively towards this clean energy transition, it will create half a million additional jobs than business as usual would create. Indian industry is obviously already stepping up and showing leadership. I was very pleased to hear that dozens of India's biggest companies recently signed a declaration on climate change, pledging to go carbon neutral," Kerry said. 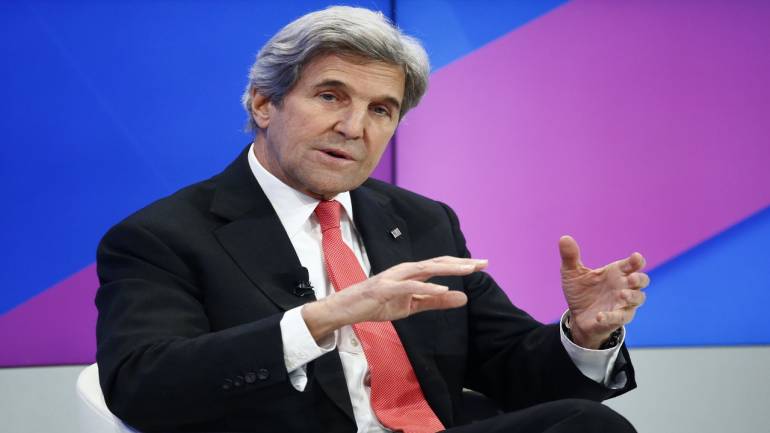 NEW DELHI : India added 3,239 megawatt (MW) solar capacity in 2020, down 56 per cent from the previous year, according to a report. The adding of 3,239 MW of solar capacity was the lowest addition in five-years-time, Mercom India Research said in its report on Tuesday.

The large-scale solar projects accounted for 78 per cent of installations with 2,520 MW, registering a 60 per cent year-on-year (y-o-y) decline. The addition of the remaining 719 MW rooftop installations was also down 22 per cent compared to the installation in 2019.


Andhra Pradesh, Rajasthan, and Gujarat were the top three states for large-scale solar capacity additions, representing around 51 per cent of 2020 installations.

"India's solar installations in 2020 were the lowest in five years. While other top solar markets in the world have experienced positive growth, India, which had one of the most stringent lockdowns in response to the pandemic, took a while to get back up and running. However, we expect the industry to experience significant positive growth in 2021," said Raj Prabhu, Chief Executive Officer of Mercom Capital Group.

According to the report, besides COVID-19, another significant bottleneck in the market has been the difficulty facing government agencies to get distribution companies (DISCOMs) to sign power sale agreements (PSA). This has left about 17-18 GW of projects without a PSA. Other short-term challenges included the rise in module prices, increased shipping and freight charges in the range of 500 per cent-800 per cent, and a surge in raw material costs.
"As a result, the average large-scale solar project costs increased slightly by 2 per cent quarter-over-quarter (q-o-q) in Q4 (October-November) 2020. However, project costs were 2.5 per cent lower compared to the same quarter in 2019," according to the report.

On its outlook for 2021, the report said it expects the industry to experience positive growth in 2021. Mercom India Research is forecasting over 10 GW of solar installations in 2021.


The rooftop solar market is experiencing a turnaround, with installations improving significantly over the second half of the year. Fourth-quarter was the strongest for rooftop installations, and the report predicts momentum to continue into Q1 (January-March) 2021.

Andhra Pradesh, Rajasthan, and Gujarat were the top three states for large-scale solar capacity additions, representing around 51% of 2020 installations

Washington: A top Biden Administration official Friday said the US has put together a coalition of several countries to help India achieve its ambitious target of producing about 450 gigawatts of renewable power by 2030, costing around USD600 billion.


John Kerry, the special presidential envoy for climate, said the US has set up a consortium of several countries eager to help India with funds and knowhow to achieve this ambitious goal.

Kerry made this remark to former Energy Secretary Ernest Moniz during a virtual Fireside Chat at IHS CERAWeek, the world’s premier energy conference.


India has a plan to produce about 450 gigawatts of renewable power by 2030, it’s a very ambitious goal. It’s a great goal but they need about 600 billion dollars to be able to help make that kind of a transition, he said.


For India, funding this goal is perhaps one of the biggest challenges, but they are determined to lead and to be an important player here, he said, adding that the United States wants to work with New Delhi on this.

I’ve put together a small consortium of several countries that are prepared to help India with some of the finance and transition, he said.


I’ve been working with major investment houses and asset managers in our country to try to determine how much private sector capital can be directed in the right place here so that we can make this transition faster, Kerry said.


Many, many companies are dealing with ESG as well as SDG commitments and now finding that it is very attractive to focus on a directly climate-related type of investment, he said.


India, he said, is extremely focused on the idea of creating its own solar capacity.


There are advances being made in solar panels that are 40 percent more efficient and don’t rely on the same ingredients as the panels being produced by China in a market they have cornered at this moment, Kerry added.


“So, there are future possibilities here of new supply chains, of new powerhouse production entities, and technology advances,” he said.

I think we are going to see a very different field of competition, number one.


“Number two, I think China, in the conversations that I had, when I was secretary and even more recently in these last couple of years at various conferences, expresses a willingness and desire to work with other countries and I think you have to put that to the test. I don’t think we have yet, he said.


Kerry said the One Belt, One Road project of China faces a challenge to their funding of coal in various parts of the world.


About 70 percent of the new coal-fired power coming online in various parts of the world is China-funded and we have raised that issue with them and that will continue to be a bone of contention, Kerry said.


But I do think, for instance on Hydrogen, that’s jump ball’ right now. We need to get much more involved in the development of that, he added.


I know India, I’ve talked to industrialists in India and government leaders who are focused on the potential of creating India the Hydrogen economy as a future, the special presidential envoy for climate said. 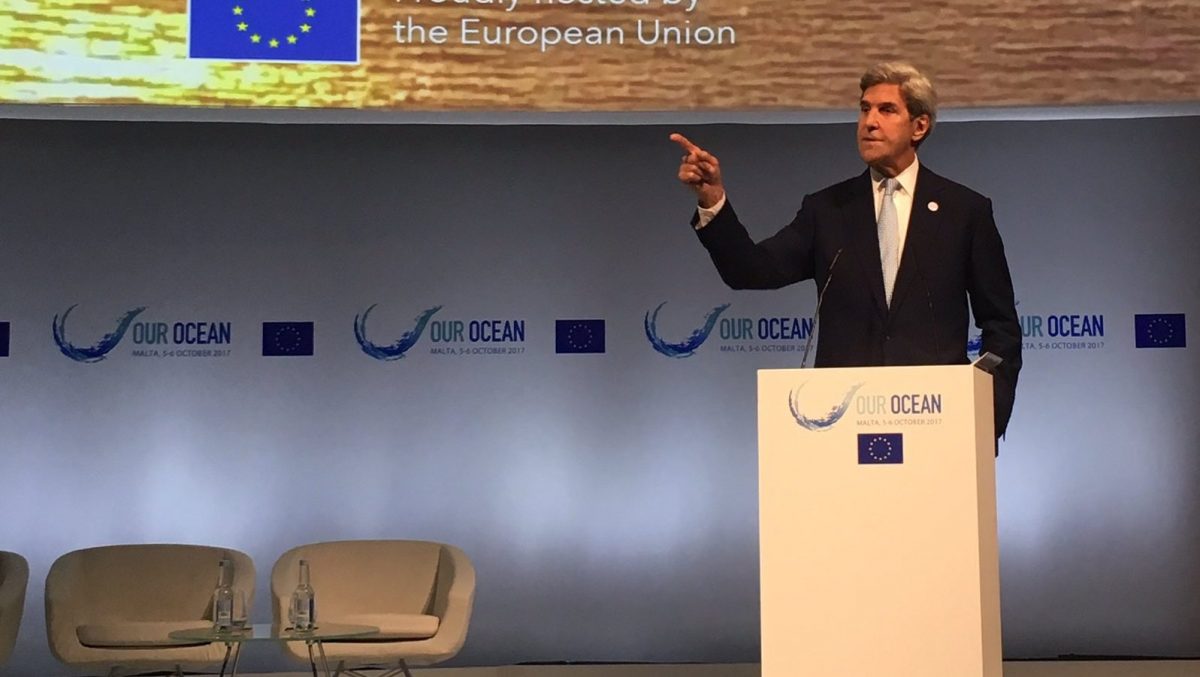 Special presidential envoy for climate John Kerry said the US has set up a consortium of countries eager to help India produce 450 gigawatts of renewable power by 2030.

Addressing a virtual press conference in Hyderabad, Anand said the floating solar photo-voltaic project would be spread over 450 acres on the water surface of Sri Ram Sagar Project reservoir. This will be the largest floating solar plant in the country in a single location as of now. The total cost of the project would be ₹423 crore, including GST, he said.

“NTPC is utilising the water bodies and huge reservoirs to set up these floating solar units, because it requires huge expenditure for ground-mounted plant. For setting up one MW solar photo-voltaic plant on ground, we require five acres,” he said.

The NTPC southern region has taken up setting up of solar power plants of the total capacity of 450 MW. Of this, 217 MW plants would be floating on water bodies. Apart from the 100 MW plant at Ramagundam, the corporation is setting up 92 MW floating unit at Kayamkulam gas plant in Kerala and a 25 MW unit at Simhadri power plant in Visakhapatnam.

“We are actually slightly delayed in implementing these floating solar projects due to the Coronavirus pandemic,” Anand said.

Regarding other solar power projects of the NTPC southern region, he said a 5 MW solar plant was set up at Port Blair Solar in Andaman & Nicobar Islands on March 30, 2012, that catered to the power needs of the Union territory; a 10 MW solar plant was commissioned at Ramagundam December 31, 2013 and the phase I- of the 250 MW (5X50 MW) Ultra Mega solar project was commissioned at N P Kunta village of Anantapur district in Andhra.

In addition, the NTPC is setting up a 230 MW ground mounted solar power plant in Ettayapuram near Tuticorin in Tamil Nadu by next year. On an average, the cost of setting up solar plant is around ₹4 crore per MW, he said.

Explaining about other ventures of the NTPC southern region, the executive director said it was in the process of commissioning 2x800 MW coal fired thermal power project at Ramgundam in Telangana. The phase I unit of 800 MW will be commissioned by January 2022 and the phase II of 800 MW by March 2022.

NTPC Southern region has total installed capacity of about 9,125 MW, out of the corporation’s total capacity of 64,880 MW in the country.

The NTPC southern region has taken up setting up of solar power plants of the total capacity of 450 MW. Of this, 217 MW plants would be floating on water bodies.