Nikhil said:
archer didn't won the battle, yes they did played a key role but it all came down to hand to hand combat in the end.

Have you ever read how that battle unfolded in first place ? terrain, English tactics played a major role during battle that's why french lost.....but this thread is not about battle tactics, but armour so here some remark from historians on battle.

Those archers were mostly effective against non armoured body areas or very light armoured infantry. French cavalry face the brunt cause the horses despite being armoured had weak non covered spots.
Click to expand...

There was no ‘standing army’ (a permanent, often professional, army composed of full-time soldiers that is not disbanded in times of peace) in either France or England in 1415. Troops were raised on a campaign-by-campaign basis. There were many similarities between the armies in terms of their recruitment, armour and equipment, but one crucial difference: the English brought relatively few men- at- arms on campaign (soldiers who wore full plate armour in battle) but a much greater proportion of archers. The significance of archers in the battle was noted at the time. Their ‘arrowstorm’ disrupted the French advance, thereby undermining their numerical superiority. Henry’s deployment of his archers has been a contested area in modern historical work, alongside the sometimes heated debate on the size of the armies.


any further conquests. Taking this evidence together, the army on the march and hence at the battle was around 9,000 strong.

The real contrast between the armies was their composition rather than their size. Of the 12,000 French, around 75 per cent were men-at-arms. The corresponding proportion for the English was 20 per cent, much as it had been at the start of the campaign. Knowledge that the English had such a small number of men-at-arms heartened the French and led to their placing more troops in the vanguard in anticipation of winning the day with a huge first clash. Ignorance, or a lack of understanding of the strength of the English archers, made them underestimate the danger that the latter posed.

At over 7,000, and defended by stakes and by the lie of the land, there were too many to knock out by a cavalry charge. The French do not seem to have deployed their own archers and crossbowmen in counter-actions even though we can show from pay records that such troops had been raised. As a result, the vanguard had little choice but to keep marching into the barrage of arrow fire, an experience for which there could be no prior training. Most were killed or wounded in the melee when they were already helpless, many by a swift dagger in the neck. Their fate dissuaded other French troops from entering the fray. Agincourt was therefore characterised by accusations of cowardice and treason as well as exceptionally high mortality rates for the French along with equally low rates for the English. 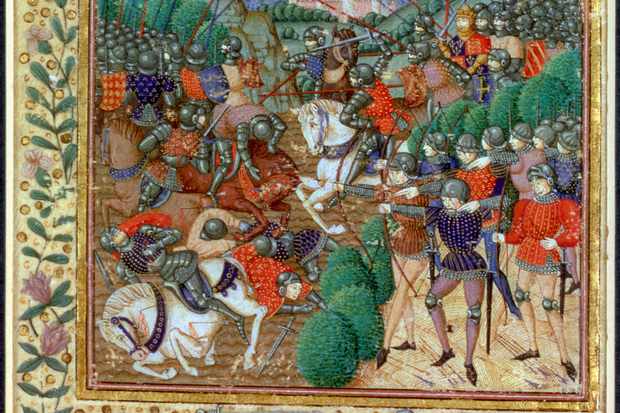 Agincourt is legendary as one of England's finest moments, but historian Anne Curry says the facts do not substantiate our rosy view of this victory – and Henry V's conduct may not have been quite as noble as chronicles suggest

You're the only one who seems to think that the English longbowmen had little or no role to play in the defeat of the plated armor French knights - the heavy cavalry & why not? How else would you justify the role of the knights in heavy armor & the heavy cavalry other wise.


Nikhil said:
You are again going on with tactics, mobility.... we are talking about technology superiority here. it's like comparing a horseman with a sword going up against a soldier with gun on foot & we all know how it turned out for the horseman.
Click to expand...

I could've written a full essay on the strategic importance of tactics, mobility, etc in winning wars & campaigns but what's the point. You'd flog your dead horse all over again. Instead I'd ask you if you've seen the Chinese movie Kung Fu Hustle ? No? Here goes -