How authentic is the news that French defence minister committing French Armed forces if the need arises? So many tweets regarding this.

vvabhiram said:
How authentic is the news that French defence minister committing French Armed forces if the need arises? So many tweets regarding this.
Click to expand...

If someone claims such immediately unfollow him. Laal Toppeee is more reliable than that person.
Reactions: Vicky, Chain Smoker, rockstarIN and 8 others

vvabhiram said:
How authentic is the news that French defence minister committing French Armed forces if the need arises? So many tweets regarding this.
Click to expand... 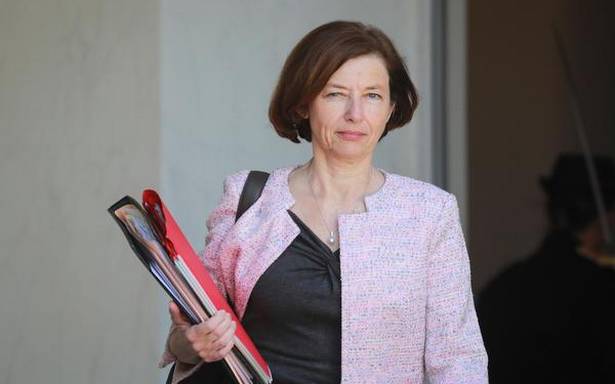 www.thehindu.com
“This was a hard blow against the soldiers, their families and the nation. In these difficult circumstances, I wish to express my steadfast and friendly support, along with that of the French armed forces. I request you to kindly convey my heartfelt condolences to the entire Indian armed forces as well as to the grieving families,” Diplomatic sources quoted Ms. Parly as having said in the letter on Monday.
S

Ginvincible said:
The Chinese have apparently engraved a symbol on disputed territory by Pangong Lake.

Can experts check if the map includes Nepal, Arunanchal pradesh, Sikkim and other critical areas? maybe some hidden message there?
N

Damn!! How did they mange to create such a huge population despite practicing such warfare tactics
Reactions: Chain Smoker, Sulla84, HariPrasad and 1 other person

If we stop china to take any gain, it will be a humiliation for them.
H

noksss said:
Damn!! How did they mange to create such a huge population despite practicing such warfare tactics
Click to expand...

I have repeatedly said one thing. Those who has specific weapons for this terrain will dominate. Spice, SAAW etc are great systems. It is like shooting with sniper than shooting with machine gun. One shot but bang on target.
J

HariPrasad said:
I have repeatedly said one thing. Those who has specific weapons for this terrain will dominate. Spice, SAAW etc are great systems. It is like shooting with sniper than shooting with machine gun. One shot but bang on target.
Click to expand...

Modify that - One who has the guts to expend men and material will dominate. The terrain and the nature of conflict will make any fight quite messy.
Reactions: Chain Smoker, screambowl and vikata
H

LoneWolfSandeep said:
All bogus reporting, here we are officially asking for faster delivery of S400 & more Fighter jets from Russia - that official news .
And as usual latest new is USA is again saying purchase of additional figher jets from Russia can invoke CAATSA sanctions..

And india as always ignored it & didnt even report it in news channels as not worth it, they said it a million times already. whats new.

Fact is Quad is getting more teeth, with India willing to commit more to it, the only holding back was due to India hesitancy ..

USA has already deployed lots of troops out of Germany, saying threat from Russia is not same as that of Communist USSR, hence not required.
While Russia is actively seeking India & Japan help in its Far east development to counter China. Also recently 1000's Chinese nationals who had taken Citizenship in Russia, Russia has revoked that Citizenship post Chinese spy scandal & Doklam incident . And sending them back in large numbers, China mum over it, as dont want to anger Russia at this point too. And Russia President is aware of plan to change demographics in Russia Far east region by China to invoke a internal breakaway towards China at a later date..

F35 comes in myth categories.. And is not consistent with other news.. Yes USA may quietly deploy F35 in Indian region with Indian permission as no S400 presently to put pressure on China, we have agreements which can cater to that..
Click to expand...

It's a bill in US senate, nothing to do with us.

Defc0n said:
The trend is important. It is an indicator of things to come.
Click to expand...

So India is taking a more economic approach to pushing China.

randomradio said:
@Falcon pointed out we can't afford to do it since millions of soldiers will die on both sides.
Click to expand...

Yes we can , provided we have the balls to do so

We have precidence to fall on eg the Chinese backed down from pancheel agreement with India and attacked India and the violations of border past and now is in contravention of signed agreements.

Only the weak adheres to agreements .

In realpolitiks agreements are made to be broken one day - the day you are strong enough to get away with it.

Indians are weak and hence they adhere to agreements inspite of transgressions since we lack the force and will to punish the violaters and rather hide under the hilarious notion of moral ascendency of maintaining agreements which is rather a soft cover for our impotence.

The USA Russia Europe regularly walk out of agreements , what's the big deal

Best we Indians get out of these silly notions of moral ascendancy . Its suicidal .
Click to expand...

@Falcon How do you folks even agree to serve under these loser 'crats and 'ticians... Dabba wallahz and PMs?
Last edited: Jul 1, 2020
Reactions: Yashpatel604, Chain Smoker, Paro and 1 other person

How can we reduce that toll?
S

randomradio said:
How can we reduce that toll?
Click to expand...