Strategic Frontier Research for Defence
Home Hitting where it hurts

The Pakistani Army is a state unto itself. The view that Pakistan is not a state with an army, but the Pakistani Army is an army with a State is not without merit. The way we deal with Pakistan needs to be seen from that perspective. Our failure to formulate a long term strategy at the military level is one of the main reasons we find it difficult to respond to the terrorist activities of Pakistan. Why are we unable to bring about a change in behaviour in Pakistan. Is there a fundamental error on how we view them? If trade and economic incentives have not achieved our goals, how do we inflict pain? Pain where it hurts. This is what we are going to try and understand.


Hitting Where It Hurts

Feb 26th 2019, is an important day in the history of modern India. The use of Indian air power, in what is essential an area inside Pakistan, was a first since 1971. While the surgical strikes were carried out by Indian troops inside Pakistan occupied J&K, the air strikes were carried out across the international border. For all practical purposes, this was a red line not crossed before.

The response was the PAF attempt to take ‘revenge’. The resulting drama and spin by the DGISPR of the Pakistani state gave insights into the strength and weakness of our response. The flip flops by the DG-ISPR further revealed the desparate attempts made by the Pakistani Army to put forth its narrative of success on an operation of failure. The spin over the ‘doosra banda” is something which will haunt the Pakistani Army forever.

The entire saga played out over that week, shows that we still do not understand the Pakistani state and it’s levers. What have we achieved with the strike on Balakot? The accepted narrative seems to be, we sent a message. The message being, we will hit terror camps even if they are in Pakistani territory and the Pakistani state has been bluffing about the nuclear trigger.

Strategic Restraint
The Indian response till date has always been of strategic restraint. One which portrays the country as a responsible and mature democracy. While the world admired and applauded the same, the target of such a policy understood it as India being a soft State, unable to respond to provocative acts of terrorism. Also, with the distinction being made in Pakistani policy jargon of state actors and non-state actors made it difficult to respond in an effective manner. This emboldened the usage of the term non-state actors in the Pakistani foreign policy language. This also results in the Pakistani narrative of moral support to banned terrorist organisations like Jaish e Mohammad, Lashkar e Taiba and others. The Indian State, till date, has been unable to provide a decisive answer to this moral support. Be it 1993 Mumbai bombings, Parliament in 2001, Akshardham in 2002, Mumbai train bombings in 2006, 26/11 attacks in 2008 and many more. This concept of moral support extends to Pakistan based terrorist organisations and through them to other disgruntled organisations in India. But, the fundamental, foundational support comes from the Pakistani state. Consecutive Indian governments have been unable or disinterested in pushing a counter moral support program. The entire concept of overt strategic restraint, hence, becomes redundant in the absence of a covert moral support program. The result is a punching bag, which once in a while can swerve, but otherwise has to take hits and still be firm.

While another member has appreciably explained the costs associated with the recent Balakot operation, I am going to try and look at it from a broader perspective.

If we were to look at the psychological, economic and diplomatic cost that we are currently pursuing, we can come to the following basic conclusions.
Psychological costs run both ways. In a country like Pakistan, which has seen multiple terms of military rule, the effect of the cost is low. In a democratic systems, the cost levied by a combative opposition can have a negative effect on the incumbent government. In this scenario, while the cost levied on Pakistan can be high, the effect of that cost is not enough to deter. But, the cost on India will result in a more than proportionate effect, due to a polarisation between the main political parties.

Economic costs, too, do not seem to have much of an effect on the Pakistani state. The Pakistani state has endured sanctions and still the GDP (adjusted for PPP) per capita has been getting better. This will mean the basic Pakistani’s living conditions are improving. Their motivation to deviate from the Pakistani narrative, therefore does not exist. Add to this the fact, that, Pakistan always finds a saviour. Be it the Saudis or Chinese or Americans. If CPEC needs to succeed, it will be in the interest of the Chinese to ensure Pakistan does not economically collapse. If not the Chinese, the Americans will step in to take their place. Economic costs, therefore can be borne by the Pakistani state by playing one power with the other. Also, macroeconomic costs taken a much longer period to have an effect on the general populace. A population which has been radicalized even more so.

A diplomatic cost also will result in the same problem. There will never be a consensus in dealing with the terror organisations which specifically target India. The UN resolution on banning Masood Azhar comes to mind, which was deliberately blocked by China. If Pakistan takes action to reduce attacks on American soldiers, one can expect a reduction in American pressure on Pakistan.

An Effective Cost
As can be seen from the above, none of the said costs will have an effect which is desired by India, deterring the Pakistani state from supporting terrorist organisations. Then the question arises, what does the Pakistani Army thrive on. It thrives on being accepted by the Pakistani public at large as the institution which knows best what is good for Pakistan. This is the ‘view’ that needs to become a cost.

One of the ways to do it would be using media to bring out the corruption levels within the Pakistani military and make that the lead in exposing the PA. But, the blowback can/will be the Pakistani population may rally behind the military. The PA with its ability to inflict coups will quickly turn this into a witch hunt of the media. This therefore cannot be the lead in disgracing the military.

Economic costs on Pakistani military owned institutions through sanctions will require buy-ins from the major powers. And as explained earlier is wont for execution.

The capture of territory, will initially result in a very strong anti-India sentiment in Pakistan. But continuous loss of territory will result in questions being raised about the effectiveness of the Pakistani military leadership. Every capture of territory, should be followed up with leaks of scams (real/imaginary) concerning the military leadership. Information or news regarding military men running companies which compete with civilian business should be portrayed as crony military capitalism. Movies depicting capture of Pakistani territory should be produced with leading actors and promoted throughout the world.

While the above will be direct contact program, indirect programs which will result in loss of control of territory should also be implemented. Balochistani nationalist feelings should be given full moral support and a platform for grievances should be provided. This should also involve nurturing of Balochi youth into think tanks in the West. Increased spends should be provided for lobbying groups for the Baloch cause. The Pashtun dominated areas need to be encouraged to rebel against the Pakistani state. The legality of the Durand Line should be brought in for scrutiny in the eyes of the world at large.

This policy will need to be implemented with the buy-in of the major political parties, irrespective of which government is in power. The Indian population will need to be provided a narrative of rightful defence. At the same time, care should be taken to ensure the Indian population does not get influenced to be part of any of the resistance movements within Pakistan. This should be restricted as arm of state policy.

The above requires taking the fight to the enemy. Moving from reactive policy to an active policy. Dropping the notion of Strategic Restraint and replacing it with a policy of Strategic Intent. 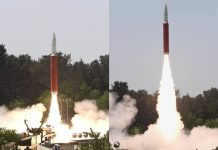 A Big Year for the Indian Military in Space

Welcome to Strategic Frontier Research. Our aim is to build a think-tank based discussion board where we propose , opine , discuss and analyse various matters relating to defence and security which has immediate and long term effect on nation building and social evolution. Join us today , be heard and become a part of the change.
Contact us: stratfront@gmail.com