USS Mitscher (I think) shot from an RNoAF F-16 during training in the North Sea in August, 2021. The U.S. Navy already has the JPALS precision landing system on its carriers and amphibious assault ships -- but the more allies that have the system, the more options open up for future operations. 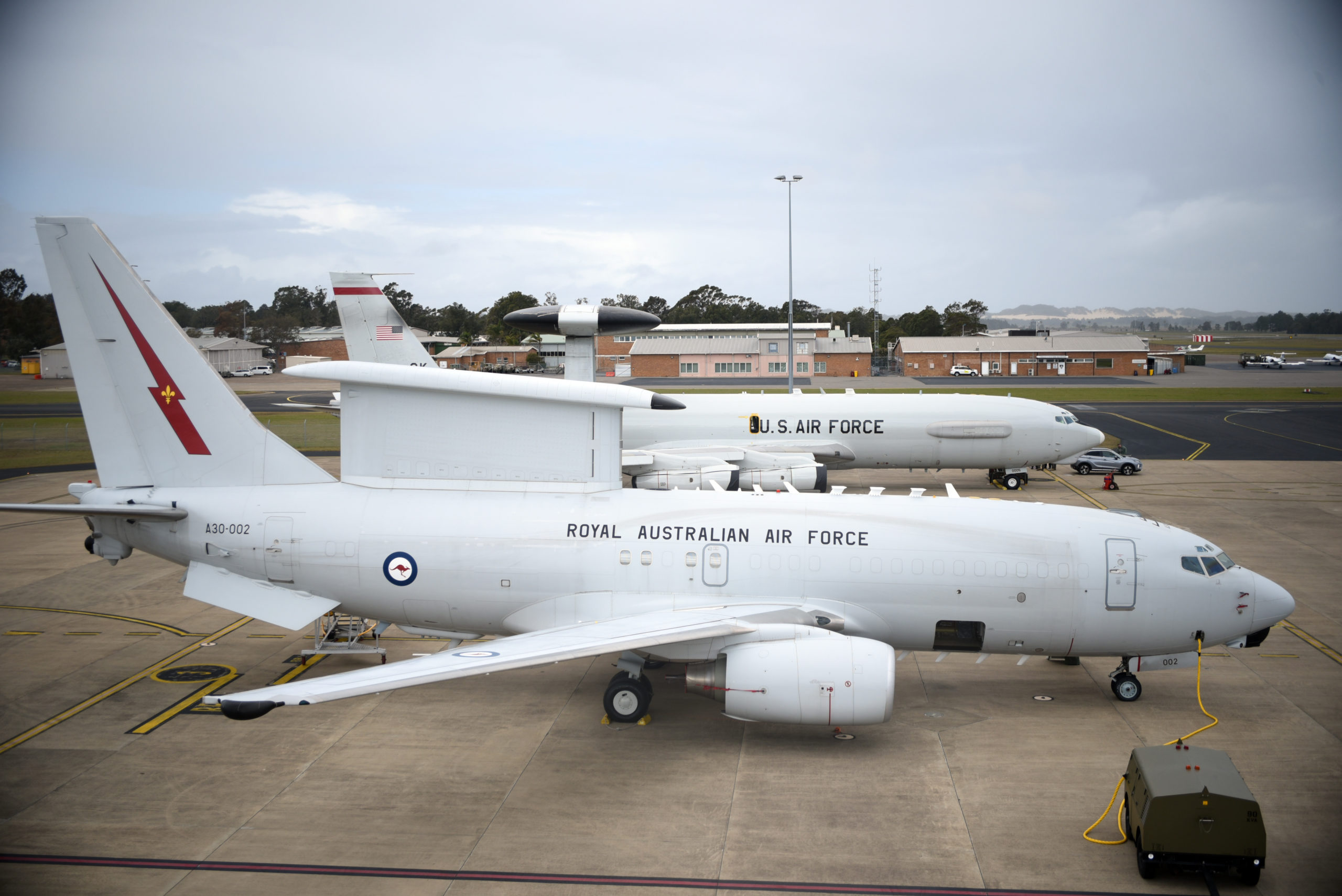 The head of Pacific Air Forces is calling for new aircraft in his theater to meet the need for air superiority,

After several cancellations over decades, the Navy’s revived interest in the Joint Air-to-Surface Missile family also reveals pursuit of more capabilities for it. The U.S. Navy next year will acquire the land-strike version of the AGM-158 cruise missile, bringing the service full circle after dropping out of the Joint Air-to-Surface Standoff Missile program in 2004.
Credit: U.S. Navy
Another new variant of a stealthy Lockheed Martin cruise missile has appeared, highlighting the surging popularity of powered, expendable munitions and revealing a fundamentally vital new capability.
An Aug. 18 U.S. Naval Air Systems Command (Navair) presolicitation notice referenced the “LRASM AGM-158C-2 Strike Capability” in the public domain for the first time. Navair responded to Aviation Week questions about 10 days later, confirming that the AGM-158C-2 is the U.S. Navy’s first air-launched, land-attack cruise missile since the Boeing AGM-84K Standoff Land Attack Missile-Extended Range entered service 21 years ago.
As the name suggests, the AGM-158C-2 builds on the Long-Range Anti-Ship Missile (LRASM) program, which has fielded a maritime strike version of the U.S. Air Force’s AGM-158B Joint Air-to-Surface Missile-Extended Range (JASSM-ER) for the Navy’s Boeing F/A-18E/Fs and the Air Force’s Rockwell B-1Bs.
The baseline AGM-158C LRASM adds a radio frequency sensor for homing in on moving targets at sea and a black, anti-corrosive coating to the JASSM-ER. The AGM-158C-2 is a naval version of the JASSM-ER, with no radio frequency terminal seeker, a Navair spokeswoman said.
In fact, the presolicitation notice is the first confirmation of the Navy’s intent to follow through with a decision announced in the service’s fiscal 2022 budget request. The request revealed the Navy’s intent to buy the JASSM, likely as a replacement for the recent cancellation of a turbojet-powered version of the Raytheon AGM-154 Joint Standoff Weapon (JSOW).
The disclosure completes the Navy’s circuitous involvement in the JASSM program. An affordable, stealthy and extended-range cruise missile attractive to multiple services has been an elusive goal within the Defense Department for decades. In the mid-1990s, the Pentagon canceled the Northrop AGM-137 Tri-Service Standoff Attack Missile (TSSAM) sought by the Air Force, Navy and U.S. Army after projected unit costs nearly tripled.
The Air Force and Navy quickly launched the JASSM program in the late 1990s to replace the TSSAM, but the partnership did not last long. The Navy decided in 2004 to withdraw from the program with no direct replacement. Several years later, DARPA proved the viability of an anti-ship version of the JASSM under the Offensive Anti-Surface Warfare (OASuW) program. The Navy launched the development of the stealthy, subsonic OASuW Increment 1 in 2014, leading to the fielding of an early operational capability of LRASM five years later.
Cruise missiles of all kinds are enjoying widespread support from defense planners. The Pentagon alone plans to field the nuclear Long-Range Stand-Off for the Air Force and Sea-Launched Cruise Missile for the Navy, along with the conventional Hypersonic Attack Cruise Missile for the Air Force and the high-speed OASuW Increment 2 for the Navy within the next decade.
Indeed, the cruise missile’s popularity serves to obscure the detailed identity of the new AGM-158C-2. Navair’s description of the new weapon as a naval version of the JASSM-ER helps—but only to a point. The Air Force has fielded new versions of the JASSM-ER since it inducted the baseline in 2015. The AGM-158B-2 features a redesigned wing that enables the missile to achieve even longer range. Finally, the AGM-158D adds a weapons data link to the AGM-158B-2. It is not clear which version of JASSM-ER is the baseline for the Navy’s AGM-158C-2.
But the Navy’s revived interest in the JASSM family has revealed other capabilities. In detailed justification reports for the Navy’s fiscal 2022 budget, the service’s request for the $1.8 million AGM-158C-2 notes that the missile’s software will be converted to the C++ language. Job advertisements posted by Lockheed, meanwhile, describe an effort to recruit programmers to convert the software language for the JASSM family to C++ from Ada, an outdated language created by the Defense Department in the late 1980s.
The switch to modern, widely accepted software language for JASSM opens the door to a vast multitude of capability upgrades. As the U.S. military experiments with containerized, inflight software updates for munitions and aircraft, software developers may find C++ code friendlier to the requirements’ Kubernetes orchestration tools than the Pentagon’s obsolete Ada. The Air Wing of the (Immediate) Future​

U.K. navy to station new vessels in Indo-Pacific for 5 years​

LONDON -- The U.K. will station two new patrol vessels in the Indo-Pacific region for "at least the next five years" as part of plans by the U.S. and its allies to check China's naval expansion, Tony Radakin, a senior Royal Navy admiral, told Nikkei in a recent interview.

Britain has been strengthening its presence in the region since leaving the European Union, and has already dispatched an aircraft carrier strike group led by the HMS Queen Elizabeth to the region. Concerns include the security of Taiwan.

Radakin said that the Taiwan Strait is clearly "part of the free and open Indo-Pacific."


His comments follow a joint statement from the Group of Seven leaders' summit in the U.K. in June that emphasized for the first time "the importance of peace and stability across the Taiwan Strait." He was speaking before the announcement on Wednesday that the U.S., Australia and the U.K. have unveiled a new Indo-Pacific security alliance.

It is "very clear that the Taiwan Strait is international waters," said Radakin. "It is a waterway that can be used by different nations."

He stressed that "this is part of the free and open Indo Pacific, and part of the rules-based order. I think it's been a very clear U.K. position, along with other nations that are signatories to [the U.N. Convention on the Law of the Sea]."

Radakin did not specifically mention China's moves against Taiwan, but he made clear that it is important to maintain freedom of navigation in the Taiwan Strait.

Earlier this month, the Queen Elizabeth carrier group made a port call at the U.S. military's Yokosuka base in Kanagawa Prefecture.

Radakin said that security cooperation between Japan and the U.K. will become even stronger, noting that the two countries are able to share facilities and equipment, and the armed forces of both countries use the highly advanced F-35 stealth fighter aircraft.

Observers believe two sides are considering closer collaboration, such as using each other's aircraft carriers for flight operations ahead of deployment of the F-35B in Japan. The ships will also help guard against illegal activities like maritime smuggling, according to the British government.

However, Britain has few military bases in the region and support from friendly nations is essential to make the deployment work. "Over 80% of the time they will be at sea ... [and will make] very short visits to countries in the region ... for logistics and fuel and supplies," said Radakin. "We would look to link with Japan as a friend and ally in the region in the same way as we would with Australia."

However, many still believe there are limits to Britain's military involvement in Asia given the need to respond to threats posed by neighboring Russia. According to the International Institute for Strategic Studies in the U.K., Britain's military spending for fiscal 2020 was $61.5 billion. That is about 20% more than Japan but much less than the U.S. or China. In terms of personnel, British troops deployed in Asia and Oceania, excluding the Middle East, account for about 0.2% of the total strength of the British military.

Asked about this, Radakin replied, "This is not about basing or stationing troops." He noted that the carrier strike group had conducted a series of joint exercises with allies and friendly countries, adding that the U.K. involvement is a chance "to come together to discuss our trading relationship and to support the trade in the region and the free flow of trade."

The U.K. aims to strengthen relations with Asian countries by helping maintain maritime order, including freedom of navigation, in the Asia-Pacific region, while also benefiting from the region's economic growth. Its ongoing negotiations to join the Trans-Pacific Partnership are also a part of this effort.

Regarding future prospects for the Royal Navy, Radakin explained: "We want to have the ships that are operating, much more strongly with Oman, with India, using Diego Garcia and operating down the east coast of Africa."

The U.K.'s presence in the region is "the reality of the Indo Pacific becoming this phenomenal trading hub for the whole world. We're an outward-facing maritime Island trading nation, and therefore we're playing our part in the region with that as a backdrop."

Japan has welcomed the deployment of British patrol vessels, which will enable more joint responses and training among Japan, the U.K. and the U.S.

Tokyo also sees the deployment as a part of a broader international pushback to China's attempts to change the status quo. U.K. navy to station new vessels in Indo-Pacific for 5 years This post has been updated with additional details on the injuries to the crew of USS Connecticut and the location of the collision. Almost a dozen sailors have been injured after a U.S. nuclear attack submarine hit an unknown underwater object in the South China Sea, USNI News has learned. The... From Lease To Own: Marines Get Two MQ-9 Reapers Of Their Own - Breaking Defense

Taking possession of two MQ-9A is a significant mile marker in the Marine Corps' efforts to establish its No. 2 acquisition priority, MUX.