“There is a gap between the approved cost and the actual completion cost. There is a provision to allow for revised costs, and we have already initiated that process. The gap is for the value of time loss and some changes that occur while implementing the project on ground,” said Ashwini Bhide, managing director, Mumbai Metro Rail Corporation (MMRC).

At 33.5 km, line 3 is the longest corridor of the Mumbai metro. The fully underground stretch runs along Colaba-Bandra-SEEPZ. The MMRC is the nodal agency for constructing this line.

The project is being financed through a mix of debt from Japan International Cooperation Agency (Jica), equal equity contribution from the central and state governments, and additional subordinate debt.

Bhide said the project was on time to be completed by 2021 as planned, but if a proposed depot at the Aarey Colony was delayed, there could be a problem. The metro project has faced protests over this depot in the western suburb of Mumbai. Green activists claim the construction of the depot will destroy green cover in the area.

Bhide said the allegation was baseless and the disputed stretch had been classified as grazing land. The MMRC now awaits clearance from the Tree Authority to cut some tree and construct the metro depot.

“It is crucial because our operations start from there. By the end of 2020, the first train will arrive, for which depot needs to be ready,” Bhide said. She added, “Earlier we had a cushion (for delay in clearance), which is now wiped out completely.”

Bhide expects 80 per cent of the Metro line’s tunneling work to be completed by December this year.

“Some additional tunneling will be completed by March–April next year. Station works are at different stages (of completion) and progressing well,” she said.
Reactions: anant_s

CBTC: The Technology behind Driverless Train.

By 2030, 5o Indian cities are expected to run on the mass rapid transport system. More people will migrate to cities in coming decades taking global city dwellers population to 6.4 billion. Conventional urban transport systems will not able to cope with the changes about ‘how and when we move’. The capacity of mass transit systems can rarely be expanded to the extent actually necessary in that case. In order to make more efficient use of existing infrastructure, existing metro lines are being modernised and increasing equipped with automated train control and safety system. More than 40 cities globally have adopted automated driverless metro trains. In India, demand for driverless metro train technology is very high. What makes automation possible in trains?
The technology behind driverless trains in called Communication Based Train Control (CBTC). CBTC technology operates through the communication between the train and equipment on the track for managing traffic. It helps identify the exact position of a train more accurately than traditional methods which depend on signal systems. The CBTC is going to be a radical move in the nation’s rail transport by displacing the presence of the loco pilot in the train. It ensures efficiency and safety of the metro in a truly international style.
Conventional metro rail requires signalling and intervention of train pilot. Whereas, the function of CBTC enabled trains is completely data based. In most CBTC rail networks, data between trains and trackside equipment are transferred using wireless communication networks, such as global system for mobile communications-railway (GSM-R) and wireless local area network (WLAN). For urban mass transit systems, WLAN is a better choice due to the availability of equipment. WLAN-based CBTC has been deployed across the major cities of the globe. In India, WLAN-based CBTC is under process in Kochi Metro Phase 1 and Delhi Metro line 8. Other Indian cities namely Ahmedabad, Mumbai, Hyderabad etc also plan to deploy driverless train technology.
In megacities like Mumbai, Delhi, Beijing and Tokyo, the number of people travelling during peak hours in very high. On automated lines, trains can run at a very short interval one after another. The capacity of an existing track can be increased by almost 50%. The difference of 90 seconds between trains is feasible. Additional trains can be deployed depending upon the need without disturbing the original timetable.
To make driverless train tech possible, additional systems like platform screens, platform track monitoring system, remote sensing and intrusion avoidance is a must. These systems eliminate the risk of fatality on tracks and improve system efficiency. If passenger pulls an emergency brake, the situation in the train can be accessed by control centre with the aid of passenger area surveillance. Since the train is connected to control centre through LAN, necessary measures can be taken to avoid any further incidence. Smoke detectors inside the train and on the track report to control room in case of fire and the train is halted at next stop.
Driverless trains are energy efficient due to optimised acceleration, traction and smooth braking. On the basis of line data, the automated system calculates exactly where and how the train should be accelerated or braked to arrive it punctually at next stop. Former train pilot can work as train attendant to service passengers and can act immediately during emergencies.
According to Union Internationale des Transports Publicis (UITP), by 2025 some 2300km of driverless metro lines will be operational in the world, compared with around 800km today. The increasingly widespread use of CBTC enabled transport systems along with rising standard of living in developing countries will encourage the competitiveness of automated technology. Almost all upcoming metro projects in India will run on driverless train tech. Kochi Metro was the first to implement CBTC followed by Delhi Metro Line 8. Mumbai Metro is expected to break global records as upcoming Line 2, Line 3, Line 4 and Line 7 have already issued financial bids to induct CBTC enabled trains. Today, most driverless trains run in Europe and the middle east. That is about to change as winds of automation are soon heading to India and China.
– Chaitanya Kulkarni

It will take 1000 years to complete this at present rate.

Mumbai CSIA T2 Metro station under construction. You can see the tubes at the end which has been dug by the TBMs, the platform, and pillars being constructed which will hold up the roof before it all gets 'covered up'. 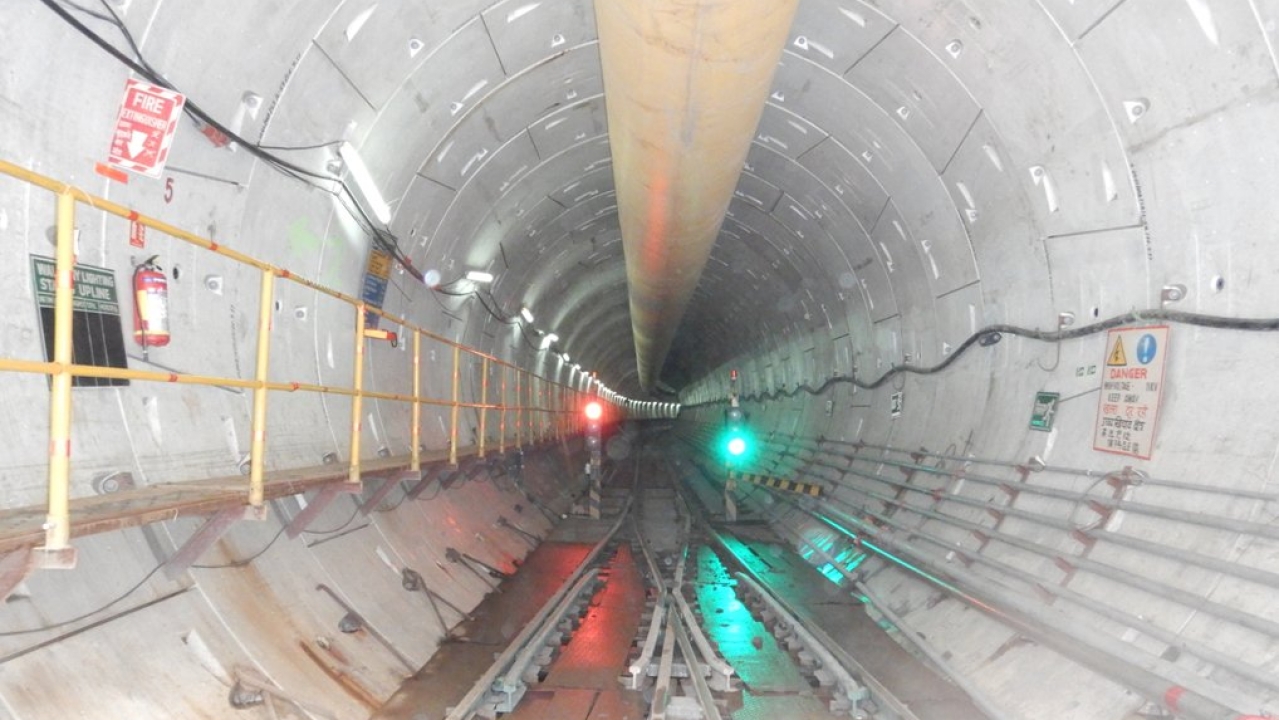 MMRC has worked in full steam with the help of 17 TBMs to tunnel the city, and are working towards the next 19 breakthroughs on the 33.5 km long metro-3 alignment.(Image via @rajtoday/Twitter) (representative image)

Mumbai’s first underground metro rail line has seen breakthrough as 28-km (50 per cent) tunnelling of Line 3 has been completed in a period 19 months. The Mumbai Metro 3, or line 3 is a 56-km line on the Colaba-Bandra-SEEPZ corridor.

Since then the MMRC has worked in full steam with the help of 17 TBMs to tunnel the city, and are working towards the next 19 breakthroughs on the 33.5 km long metro-3 alignment.

The first breakthrough on alignment came in September 2018, followed by 12 more breakthroughs achieved at SEEPZ, CSIA T2, Sahar Station, MIDC, Domestic Airport T1, Dadar, Worli, Vidyanagari and Vidhan Bhavan over the next eight months till May 2019.

The longest line of tunnelling completed is the 3.9 km-long stretch between Vidyanagari and the Domestic Airport, and the shortest line is the 562-meter long Sariput Nagar to SEEPZ stretch. Totally, 19,504 segment rings were used to tunnel the completed 28 km stretch. 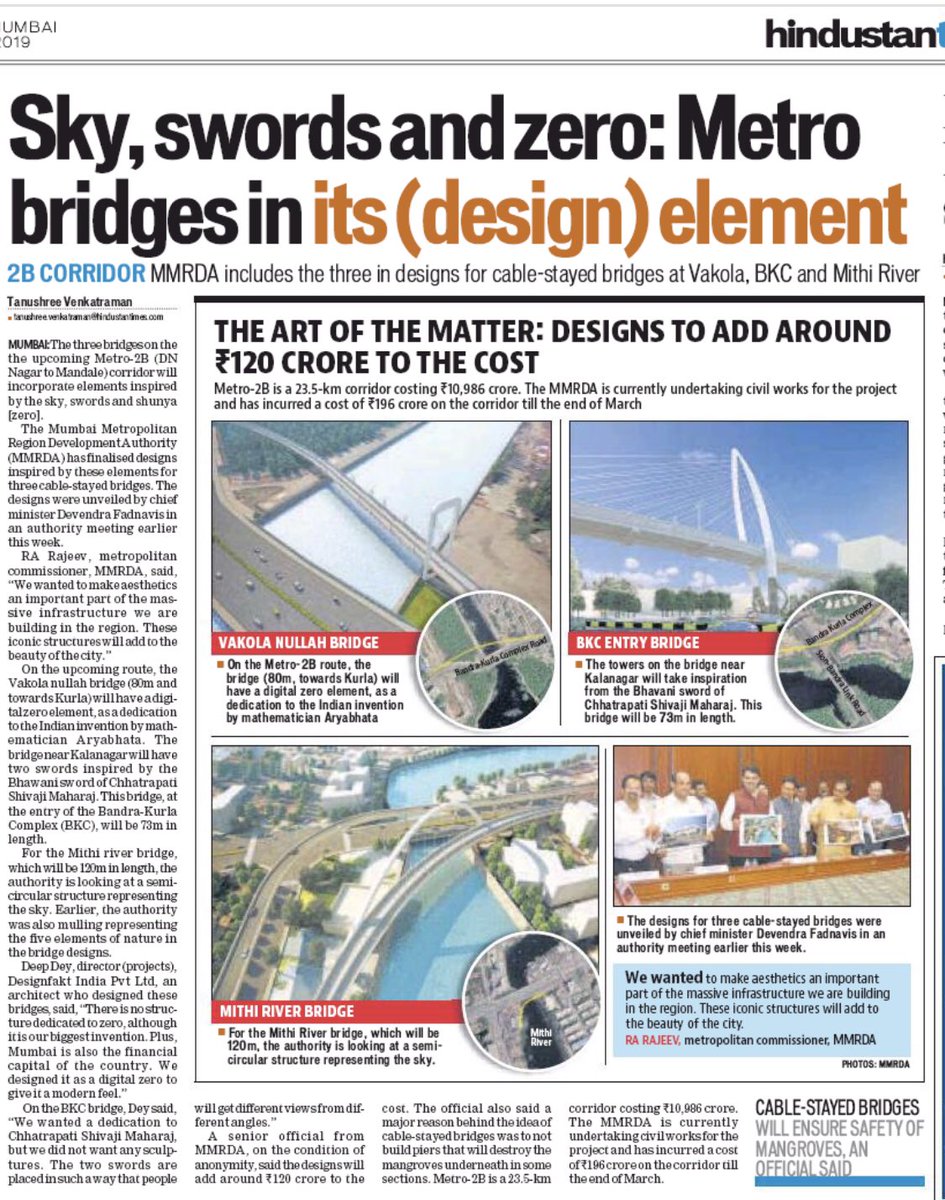 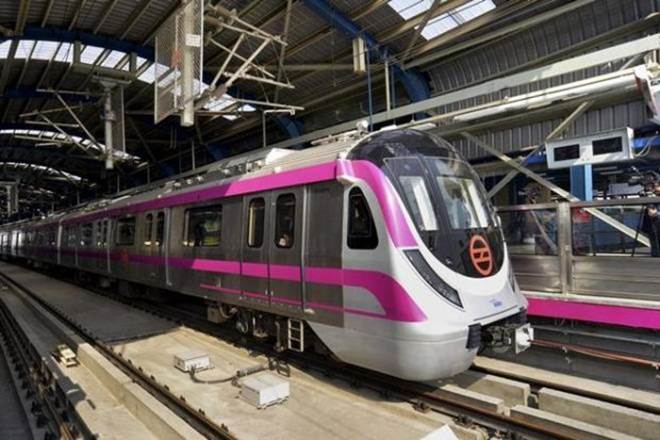 The success of Delhi Metro has paved the way for the exponential growth of the rapid mass transit systems in several big cities across India.

India bets on ‘Metrolite’ systems for smaller cities! Following the unprecedented success of Delhi Metro, several big cities across India have started their own rapid mass transit systems. There is no doubt that metro networks have changed the way common people travel in these cities. Now, the Narendra Modi government wants to take forward the “success of metro rail” to cities with less ridership. To provide the rail-based mass rapid transit system to people in these cities, the central government was planning to bring in Light Urban Rail Transit System named “Metrolite” with lesser capacity at much less cost.

Piyush Goyal shared a video that talks about the engineering associated with the construction of the underwater metro tunnels. The entire project is about 16.6 km long. (Twitter/@PiyushGoyal)

Commuters in the City of Joy will soon be able to travel through India’s first underwater metro. Today, Union Railway Minister Piyush Goyal took to Twitter to announce that the metro will be built under Kolkata’s Hooghly river.

“India’s first underwater train will soon start running under the Hooghly River in Kolkata. This train is an example of excellent engineering of India and an evidence of the progress of Indian railways,” reads Goyal’s tweet when translated from Hindi. “This service will ensure comfortable transportation for Kolkata residents, and will also make the country proud,” he further added.

Along with the caption, Goyal also shared a video that talks about the engineering associated with the construction of the underwater metro tunnels.

People showered all kinds of comments on the post. “You are doing marvelous job. Congratulations,” wrote a Twitter user. “Thanks a lot for a great progress of Indian railway,” tweeted another. “It’s amazing. India’s 1st water underground train,” rejoiced a third.

The project, which is about 16.6 km long, connects Howrah to the west and Salt Lake to the east. Out of the entire length, 10.8 km runs under the ground. It’s 502 meters of this 10.8 km that will run under the Hooghly river. Pune Metro coaches will be India's first aluminium-bodied coaches with Titagarh Firema winning the international bid for the design, supply, manufacture and commissioning of passenger rolling stock for the Pune Metro Rail Project. Pune Metro on fast-track! The upcoming metro network in the city of Pune will have India’s first aluminium bodied metro rail coaches, giving a huge leap for Prime Minister Narendra Modi’s ‘Make In India’ initiative. Being targeted for operations by the year 2021-2022, the Pune Metro Rail project has been undertaken by the Maharashtra Metro Rail Corporation (Maha Metro). Maha Metro is a special purpose vehicle (SPV) of Government of India and the Government of Maharashtra. The Pune Metro network intends to develop world-class metro stations. With the recent project update of having technology-advanced, state-of-the-art metro coaches, it has raised a level for all rapid transit systems across the country. Some of the prominent facts and features about the Pune Metro coaches are as follows: