Vikrant looks very short compared to Vicky. I wonder how will the pilots land Mig-29Ks on that deck which hardly offers 180-190 meters. The pilots are already pushing their limits on Vicky.

Definitely they are doing on of the toughest job in the world.
Reactions: Volcano
R

KOCHI: With the second refitment of INS Vikramaditya over, the country’s lone operational aircraft carrier will be entering the sea-trial stage by next week. The short refit, at an expense of Rs 705 crore, was carried out at the Cochin Shipyard and the aircraft carrier is now docked at Ernakulam Wharf, prior to the commencement of the sea trials.

During an onboard visit arranged by the Navy for media persons on Saturday, Commanding Officer of INS Vikramaditya Captain Puruvir Das said the refitment of the ship has been completed.

“However, a few tests, including the checks on the ship’s boilers, are underway. Soon, we will start the sea trials, which will take place off the Kochi and Goa coasts. We are hopeful of returning to the Western Naval Command without delay,” he said.

As part of refitment, major work was carried out at the hull of the ship. “We did Hull survey and paint scheme renewal. Also, repair work was carried out in the shaft system of the ship,” he said. The shaft of the ship comprises 25 bearing, of which 16 were replaced. Routines were performed on sewage treatment plant, ship’s main propulsion plant and on all weapons and sensors. “The refitment will enhance the operations of Vikramaditya. It will be ready for sea operations once the trials are completed,” said Captain Puruvir Das.

Commissioned in November 2013, the ship is assigned to the Western Fleet and is based at Karwar in Karnataka. The total designated crew strength of INS Vikramaditya is 145 officers and 1,600 sailors. The ships power generation and distribution section maintain 12 generators which produce 18 MW power that can power 100 villages. The 45,000-tonne ship is 285 metres long and 60 metres wide having 23 decks equalling almost 23 acres of land. 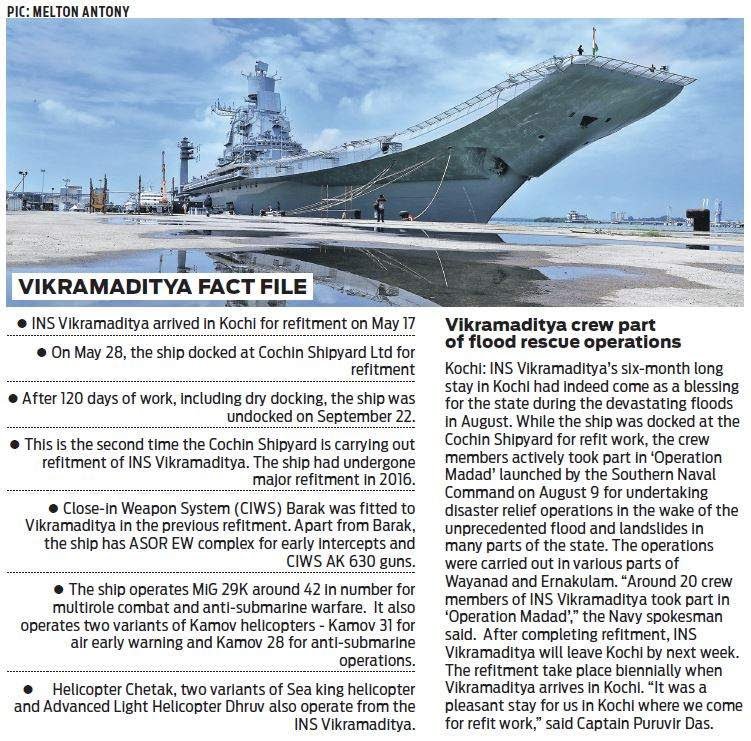 Russia Admits That It Can’t Retrofit Aircraft Carrier After Accident

You don't want the Russians involved with the Indian navy beyond frigates and subs.
Reactions: R!cK and Parthu
S

Via the Twitter handle of BBC Hindi's Jugal R. Purohit: How recent is this?

GuardianRED said:
How recent is this?
Click to expand... Pics. from January 2019. Google earth pi might be more recent. Both INS Vikramaditya and DRDO Tech ship are missing.
Reactions: Pundrick, Hellfire, GuardianRED and 1 other person

Comparing 2018 pic with the current. Not much changes on the deck. Are we working below deck or what ? Gautam said:
Comparing 2018 pic with the current. Not much changes on the deck. Are we working below deck or what ?
View attachment 5040
Click to expand...

You Guess is good as anybodies - Last unconfirmed Info was that there are possible modifications are done to the external elevators to accommodate the Rafale - hence the delay
Reactions: Hellfire

GuardianRED said:
You Guess is good as anybodies - Last unconfirmed Info was that there are possible modifications are done to the external elevators to accommodate the Rafale - hence the delay
Click to expand...

Really ? The navy is leaning on the Rafale-M then, that would make sense from a logistics standpoint.
Reactions: GuardianRED

Gautam said:
Really ? The navy is leaning on the Rafale-M then, that would make sense from a logistics standpoint.
Click to expand...

Logistics - inventory - training - you name it - all positive

That image is many years old actually.

Alright, I am having an off day decided to post some pics of the IAC-1 :
First off some CGI : For an organisation designing an aircraft carrier for the first time the DND has outdone itself. But, allow me to nitpick a bit. The island is excessively large. Sure, mounting the MF-STAR is very helpful, still it will ends up taking too much deck space. A smaller island that is a bit more rear set would have been better from the aircraft handling point of view. I would have preferred a Queen Elizabeth like launching deck rather than the Vikramaditya type angled deck. But then its just my opinion and the navy has a lot of experience operating the Vicky, that must have influenced the design.
For a first attempt there isn't a lot to complain about. If anything, this has got me to elevate my hopes from the INS Vishal. That one will be a killer.


Parthu said:
That image is many years old actually.
Click to expand...

Pics from 2015 :
Island under construction. Dry dock. Interestingly there seems to be some sort of control surfaces on the sides as well. By the way, why are propellers always golden ? Are they made out of gold ? @Falcon @vstol Jockey @Parthu Images for the launch day I think Gautam said:
I would have preferred a Queen Elizabeth like launching deck rather than the Vikramaditya type angled deck.
Click to expand...

The Queen Elizabeth class was designed for STOVL aircraft, specifically the F-35B.

STOBAR and CATOBAR carriers have the AR in common: arrested recovery. This means the aircraft needs to catch an arresting wire with its tailhook, and the arresting wire's system helps it decelerate swiftly. But what happens if the pilot misses the wire? Then we have what Navy pilots call a "Bolter": the aircraft is not decelerated at all and continued on its way straight ahead. Best case scenario, then, is that it still go fast enough to take off instead of falling into the drink; and that's why deck landing procedures involve throttling up to full thrust including afterburners just before attempting to catch a wire.

The ever-present risk of bolting means that there needs to be absolutely nothing in front of the aircraft as it tries to land. Imagine if there's another aircraft straight ahead, getting ready for take off, and you missed the wire? Catastrophic collision. And what if the bolting fails and the aircraft falls in the sea? Then if it falls in front of the carrier, the carrier then crushes it (and the pilot). Whereas if the aircraft falls on the side of the carrier, the pilot can be rescued by helicopter if the rescue copter crew is fast enough. That's why CATOBAR and STOBAR carrier designs both feature angled decks.
Reactions: Austerlitz, Hellfire and Gautam

A Person said:
That's why CATOBAR and STOBAR carrier designs both feature angled decks. The aircraft land on the angled part, and get ready to take off on the straight part.
Click to expand...

Very informative post about the differences between STOVL and STOBAR, sir. But that's not what I meant when I said "angled deck". Both Queen Elizabeth and INS Vikrant lack any catapult and thus have to use a "ski-ramp" of some kind to take off. All I was saying is that the ramp on the Queen Eli.. looks better to my eyes purely from an aesthetic point of view. Whereas the ramp on Vikrant looks very much inspired by Vikramaditya.

Gautam said:
Dry dock. Interestingly there seems to be some sort of control surfaces on the sides as well. By the way, why are propellers always golden ? Are they made out of gold ? @Falcon @vstol Jockey @Parthu
Click to expand...

Bronze it would seem. Good information available in open source. Are they made in India ? Who makes them I wonder.
Properties of Bronze for Marine Propellers
Why the World's Largest Ship Propeller is Made of Bronze
Show hidden low quality content
You must log in or register to reply here.
Share:
Facebook Twitter Reddit WhatsApp Email Share Link
Top Bottom