I do not know the exact reason but it's finances mostly. The aim was to replace all older ICF type coaches with lhb ones asap. But the ICF ones were in production till quite recent times. It will not make financial sense to replace new coaches.
Reactions: Gautam

Ankit Kumar said:
Production plans for Railway Coaches have been severely cut down for upcoming FY from previously planned 8600+ LHB coaches of various types to just over 5000+ such coaches.
Click to expand...

Due to pandemic or further privatisation of trains? Needing less coaches for reduced trains going into the future

vingensys said:
Due to pandemic or further privatisation of trains? Needing less coaches for reduced trains going into the future
Click to expand...

Around 2 months back an internal whip was issued to reconsider the priority of every project (except DFC and Electrification/Doubling) . I feel it's related to that only. Finances are the major cause behind imo. Some gauge conversion projects have been stalled too.
Reactions: vingensys

Railway Board has officially reduced the codal (service lives) of Diesel Electric locomotives for mainline duties from 36 years to 30 years. Also it has been announced that the High Powered (EMDs) and High efficiency (GE) locos will the last ones to go.

This means that some sense has prevailed and not all locomotives old and new will be taken out of service within next few years.

Indian Railways conducts water-spilling test to demonstrate the smoothness of upgraded rail tracks! In a bid to make the travel experience faster and safer for railway passengers, the national transporter is carrying out track maintenance round the clock. According to the Railway Ministry, the railway route between Londa and Miraj, under the South Western Railway zone, has been upgraded. The ministry claimed that the route is now fit for running trains above the speeds of 125 km per hour. To demonstrate the smoothness of this route, Indian Railways had conducted the water challenge. Watch the video to see how the glass full of water doesn’t spill over the surface:

This was not the first time that Indian Railways had conducted this water challenge. A few days ago, thorough railway track maintenance was done between the Gadag-Hotgi section in the states of Karnataka and Maharashtra. The water spilling test was conducted on this route as well. Interestingly, not even a single drop of water spilled out of the glass even when the train was running over a speed of 100 km per hour. The Railway Ministry had stated that the national transporter is committed to make travel faster, smoother and safer for railway passengers.

In September 2020, Railway Minister Piyush Goyal in a written reply to a question in the Parliament had said that tracks are replaced through track renewal works. According to the minister, the renewal works of railway track are carried out as and when a railway track section becomes due for renewal, based on the criteria laid down in the Indian Railway Permanent Way Manual on basis of age or condition viz. traffic carried in terms of gross MT, corrosion of rails, incidence of rail fracture or any failure, wear of rails, maintainability of rail track as per standards, etc. If required, the track renewal works on Meter Gauge and Narrow Gauge tracks are carried out after due consideration of the progress of execution of gauge conversion, Goyal said. 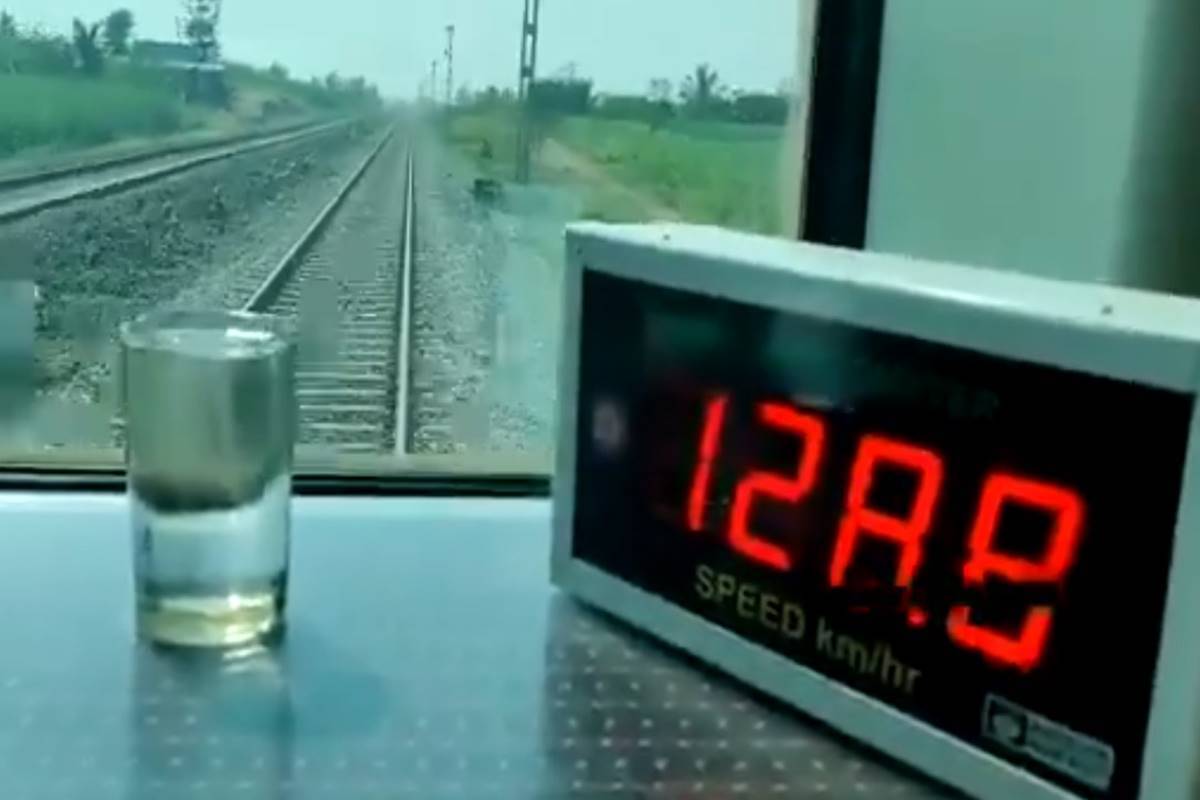 To make the travel experience faster and safer for railway passengers, the national transporter is carrying out track maintenance round the clock.

Railways draws up big plan to double its loading capacity by 2024, calls for ‘reinvention’​

New Delhi: As the Indian Railways continues to rely more on freight train movement to generate revenue, it has now drawn up an ambitious plan to almost double its loading capacity in the next four years, ThePrint has learnt.

The plan needed to achieve “2,024 MT (metric tonne) loading in 2024” was mentioned in a letter dated 3 November that was sent by the Railway Board to general managers across all divisions and zones. At present, the Railways’ loading capacity is about 1,200-1,300 MT.

To double up its loading, the board has listed several steps needed to boost infrastructure on a priority basis.

Upgrade of the speeding on the Golden Quadrilateral to 130 kmph by December next year, and the entire HDN and HUN by 2024, upgrade of the speed of New Delhi-Mumbai and New Delhi-Kolkata freight trains to 160 kmph by 2024, identifying all signifying work by March 2024, commissioning the Eastern and Western Dedicated Freight Corridors by June 2022, and completing at least 146 railway electrification projects by December 2024 are among the other steps.

“As is apparent, the vision is ambitious and it will require the Indian Railways to reinvent itself to achieve the vision,” said the letter by the Member, Infrastructure, Railway Board, a copy of which was accessed by ThePrint.

“The focus on completion of projects will require planning at the earliest with clear short-term and long-term goals with regular monitoring and corrective action during execution,” it added.

On fund arrangement
The letter said another challenge “would be to arrange funds for the same during the next four years”.

“The resource allocation depends upon internal generation, gross budgetary support from the Ministry of Finance as well as market borrowing through the Indian Railway Finance Corporation.”

It added: “In case of borrowings, the debt service liability also needs to be taken in account and that is why the timely and even early completion of projects is necessary. No cost and time overruns should be allowed.”

The letter said while fund allocation for these projects will not be a problem, funds will be made available according to the performance of the Railways.

“The fund allotment will be as per the performance of the Railways vis-à-vis their plan for these projects, which will bring a paradigm shift in Railways project execution.”

Explaining the “paradigm shift”, a railway official told ThePrint this is the first time that incentive-driven development is being planned in the Railways.

“The general managers would be given the personal responsibility of the timely execution of the projects on the basis of which more funds will be released. It will lead to healthy competition as well as a target-oriented approach,” said the official.

The Railways has been planning an array of reforms to make itself more market-driven and attract business.

Earlier this year, the Railways decided to set up business development units at all zonal and divisional levels that would stay in touch with industries and advertise the willingness of Railways “to attract new streams of traffic”.

Railways draws up big plan to double its loading capacity by 2024, calls for ‘reinvention’

In a letter, the Railway Board lists several steps needed to boost infrastructure to achieve the target. It also says funds will be made available based on the Railways' performance.

New Delhi: Indian Railways has been working for the past few years to make its services more efficient. Not only passenger train services but freight trains services are being worked upon. Note that Indian Railways is among the world's largest rail networks, and its route length network is spread over 1,23,236 km, with 9,146 freight trains, plying 3 million tonnes (MT) of freight daily from 7,349 stations.

For those who are not aware, Rail freight transport is the use of railroads and trains to transport. Unlike passenger trains like Shatabdi, Rajdhani or Duronti, freight trains are rarely named. The average speed of freight trains in India is around 24 km/hour.

However, a video posted by Twitter handle DRM Bengaluru recently changes this scenario. DRM Bengaluru shared a video with a caption which read, "NO, THIS IS NOT AN EXPRESS TRAIN. It is a container freight train running at 100kmph between BSM-VRDP section in SBC Division, with a trailing load of 1800 tons hauled by WAG9/41055 of KJM Shed. From JTJ to WFD the 120 km distance was covered in two hrs'.

As per the tweet, this particular container freight train was way above the average speed. A user also commented on the post saying that 100 Kmph should be the norm now.

Railway Minister Piyush Goyal also reshared the video through a tweet which said, "Watch how in New India, freight trains are giving strong competition to express trains in terms of speed. A container freight train running at 100 Kmph with a trailing load of 1800 tons on Bisanattam-Varadapur section in Andhra Pradesh & Karnataka."

It is worth adding that soon, 12,000 HP electric locomotives, manufactured by Alstom will run freight trains in India last month, Piyush Goyal chaired Railway Ministry approved Alstom-built 12,000 HP e-locos to run freight trains across the Indian Railways network at a maximum speed of 120 km per hour.

According to a press release issued by Alstom, these e-locomotives will allow safer and faster movement of heavier freight train services that are capable to haul around 6000 tonnes freight at 120 km per hour of top speed. These locos have been planned to be deployed for operations on major freight routes of the Railways network including the Dedicated Freight Corridors (DFCs).

These electric locomotives are expected to increase the average speed of Indian Railways freight trains by at least 20 to 25 km per hour. Earlier this year, the national transporter also began inducting the WAG 12B e-locomotives, which are said to be the most powerful locos to run on Indian Railways tracks. 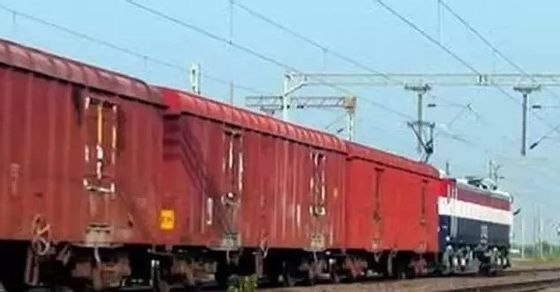 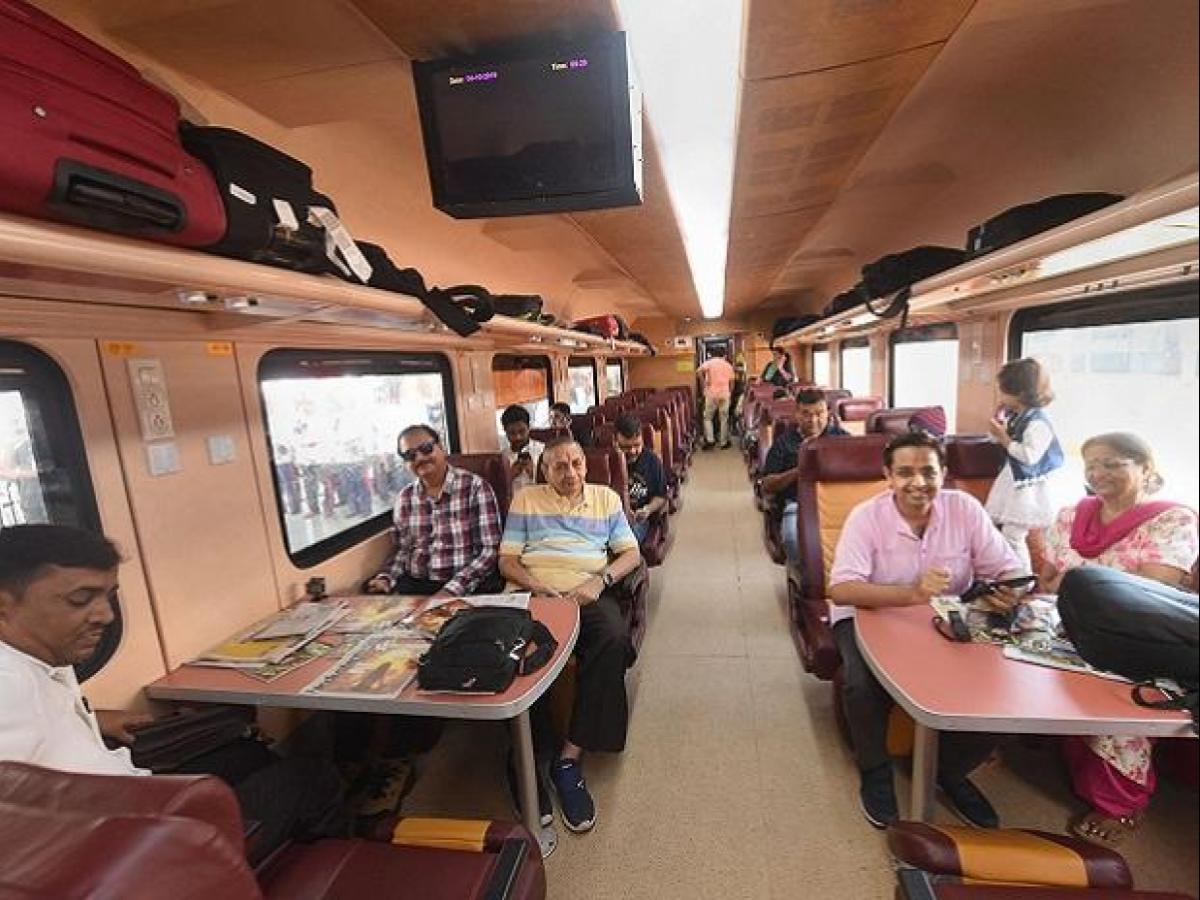 Read more about GMR, L&T, BHEL among 13 players shortlisted for operating private trains on Business-standard. The operators would be selected after the requests for proposals (RFP) are submitted with a revenue share quote

Indian Railways will be running freight trains on 40 per cent length of its dedicated freight corridor (DFC) by next year, Financial Express reports.

The DFC Project is worth Rs 81,459 crore and R N Singh, Managing Director of Dedicated Freight Corridor Corporation of India Limited (DFCCIL), has announced that 40 per cent of the DFC route km is slated to be completed in the ongoing financial year.

The Western DFC is 1,504 km long and is connected from J N Port in Mumbai to Dadri in Uttar Pradesh. On the other hand, the Eastern DFC is spread across 1,856 km and joins Sahnewal situated near Ludhiana in Punjab to Dankuni in West Bengal.

The ‘Roll-on Roll-off (Ro-Ro)’ services of the Indian Railways can commence post the completion of the Dadri-Rewari section of the DFC. Loaded trucks can be moved through flat rakes via this system. The ‘Ro-Ro’ service looks to deduct the emission of carbon and reduce traffic on the NCR roads that witness movement of around 66,000 trucks per day. 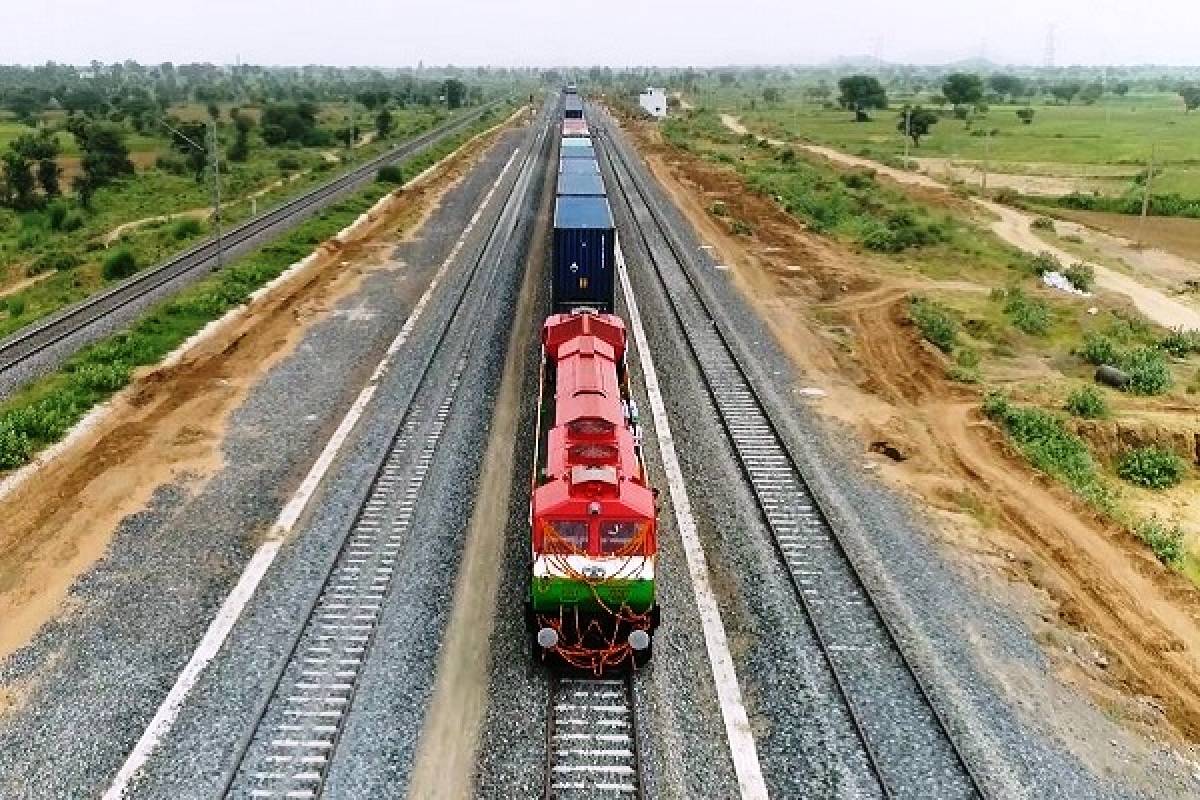 The project is worth Rs 81,459 crore and is one of the biggest infrastructure works undertaken by the government.

Emphasising on technology, Indian Railways is installing a new system to do away with guard vans and the practice of deploying guards at the rear-end of goods trains to ensure all wagons remain intact when the train is in motion. 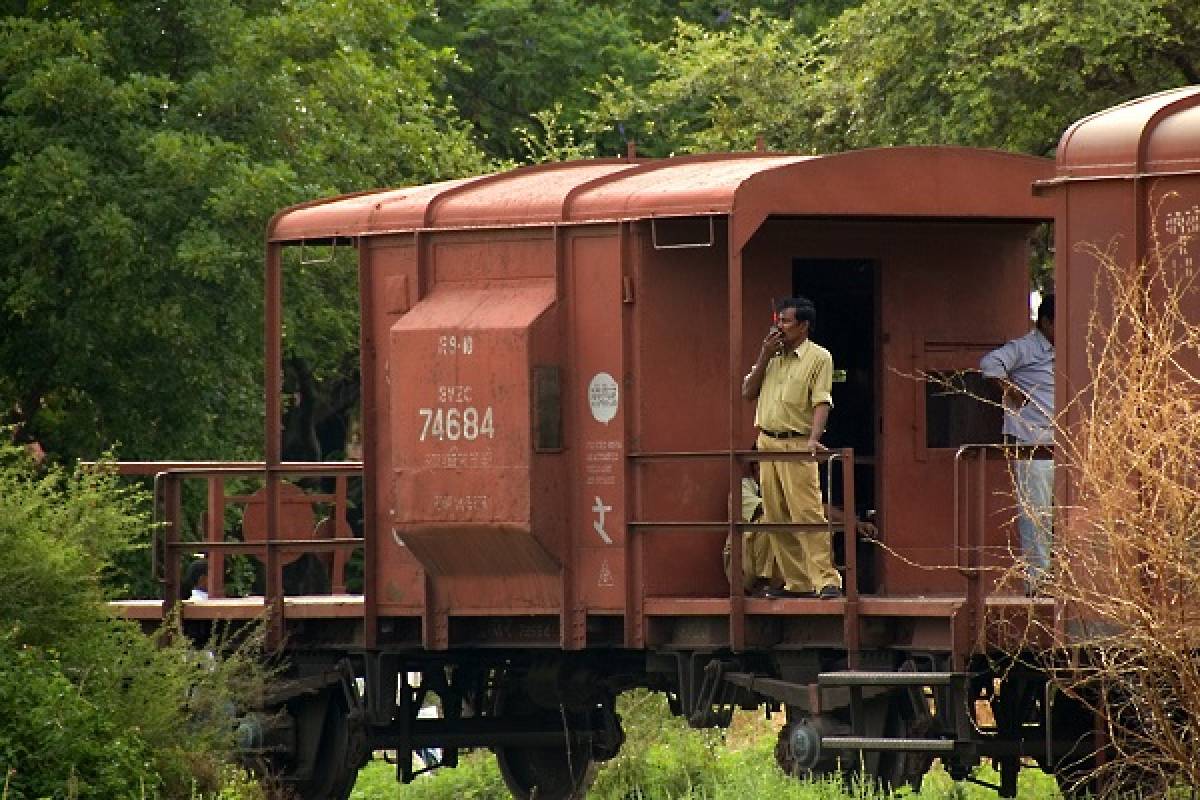 Each set of EoTT devices is estimated to cost approximately Rs 10 lakh.