https://twitter.com/i/web/status/1217672858341494784
This makes me extremely sad. When will the GOI wake up and address the needs of the Navy.
If this continues, we will very well lose the IOR to the Chinese PLAN.
Reactions: vingensys

With the advent of technology and refining techniques in the petroleum industry better quality of fuel abiding to more stringent specifications has become a necessity. 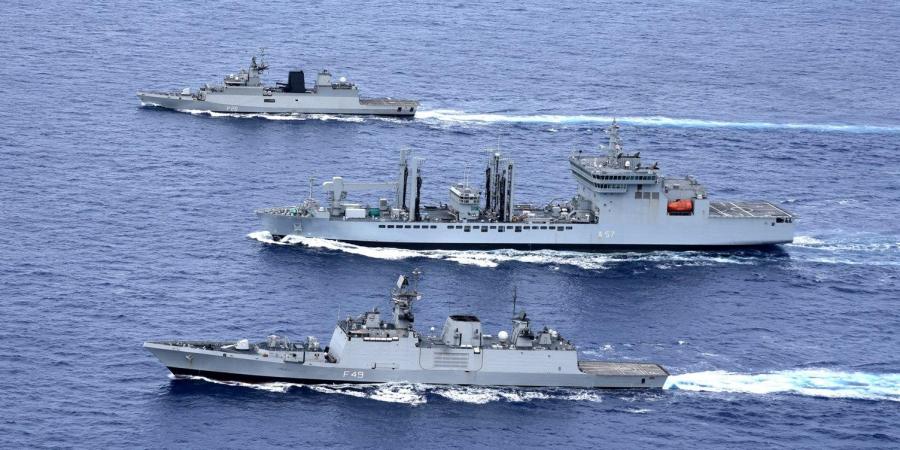 NEW DELHI: Indian Navy has succeeded in bringing down its carbon footprint by revising the fuel quality standards. The improvement is the result of a successful study which Navy conducted with the Indian Oil Corporation Limited. The standards achieved, as claimed by Navy, are better than those under the international regulations thus helping in supporting country’s international logistics agreements as well.

The new specification will not only ensure a better quality fuel but also result in a reduced carbon footprint, added Navy.

The success was achieved by “Leveraging technology and improved refining techniques available with the country’s petroleum industry, the Indian Navy in collaboration with M/s IOCL carried out an extensive and thorough study and a comparative evaluation of existing international regulations (ISO, MARPOL, NATO etc).” said Navy.

The Navies worldwide are fuel-intensive operating warships, submarines and aircraft. The Indian Navy’s present force level comprises about 140 ships and submarines and more than 200 aircraft safeguarding a large coastline of 7516 Kms with 1197 offshore islands and 2.01 million sq kms of Exclusive Economic Zone.

With the advent of technology and refining techniques in the petroleum industry better quality of fuel abiding to more stringent specifications has become a necessity.

All this took time and started with limited supply. “IOCL, post upgradation of the refinery units, initiated limited supply of the product to Indian Navy platforms following which rigorous machinery performance checks and acceptance trials were carried out.”

Distinct improvements in fuel quality were observed. Given the positive results, the new fuel was therefore decided for pan Navy implementation. On 13 January 2020, the launch of the new fuel (High Flash High-Speed Diesel) HFHSD – IN 512, with revised technical specifications was undertaken, informed Navy. The customized fuel will be supplied by Haldia and Paradip refineries of the IOCL.

The upgraded fuel quality will help at the international level. The Navy said, “With this, the country will be able to ensure interoperability amongst foreign navies during fleet exercises and provide fuel of quality better than that mandated to all foreign navies under bilateral/ multi-national logistics support pacts including LEMOA (Logistics Exchange Memorandum of Agreement).”

The joint study will accrue more benefits as this effort would also benefit other IOCL consumers in the country like Indian Coast Guard and other merchant marines in the coming years. The achievement would also mark a new high with quality fuel available to all foreign Navy ships at Indian ports during exercises with the Indian Navy.

This revolutionary initiative would go a long way in enhancing equipment reliability, performance, reduced carbon footprint, emissions and more importantly would be key enabler in the Navy’s ‘Mission Based Deployment’ on a global scale, said the Navy.

The Indian Navy’s All New Fuel

If you guys remember, I had very clearly stated that IN was tracking two submarines post Pulwama and Balakot. We took some time to locate the sub hidden near Gwader but this other one was close to Mumbai and was a target. But many members here posted the OSINT to say that PN had only one operational submarine.
Reactions: Abhay rajput and STEPHEN COHEN

Navy to the rescue

Earlier this week, India sent an amphibious warship, INS Airavat, to Madagascar in the Indian Ocean Region (IOR) to help in rescue efforts after the island nation was hit by a cyclone. As part of Operation Vanilla, the Navy delivered clothing, food and medicines, and also provided diving and communication assistance for evacuation. The move follows an appeal by Madagascar President Andry Rajoelina for international help to deal with an unprecedented situation caused by floods.

New Delhi’s prompt response doesn’t come as a surprise. In recent years, humanitarian operations have emerged as a key component of the Indian Navy’s peacetime strategy in the IOR. In March 2019, the Navy deployed four warships for relief operations when Mozambique was hit by Cyclone Idai. Indian naval teams played a stellar role in search and rescue operations and even set up medical camps. A few months later, the Navy sent two warships to Japan to assist in rescue efforts following Typhoon Hagibis.

A year earlier, Indian vessels had delivered urgent medical assistance to Sulawesi, Indonesia, after it was struck by a high-intensity earthquake. Operation Samudra Maitri was launched after a telephonic conversation between Prime Minister Narendra Modi and Indonesian President Joko Widodo, with naval planners mobilising assets and relief material in quick time. The Navy’s new humanitarian approach, many say, is a maritime manifestation of Mr. Modi’s vision for the IOR, christened SAGAR (Security And Growth for All in the Region).

Yet the Navy’s turn towards human-centred maritime security isn’t recent. It was in the aftermath of the 2004 tsunami that naval commanders first recognised the importance of large-scale relief and rescue missions in the IOR. For over a decade, considerable resource and energy has been spent developing specialist capability and skills for naval humanitarian operations.

What’s new today is New Delhi’s resolve to burnish its ‘regional security provider’ credentials. The Navy has reached out to countries across the Indo-Pacific region, with greater deployment of assets, personnel and specialist equipment, showcasing an ability to undertake complex and diverse missions. The high point of the Navy’s ‘benign’ efforts was the evacuation of over 1,500 Indian expatriates and 1,300 foreign nationals from Yemen in 2015 amid fighting for control of Aden. Three years later, Indian naval ships were in Yemen again, to evacuate 38 Indians stranded in the cyclone-hit Socotra Island.

The Navy’s humanitarian impulse stems from a desire to be a linchpin of security in the IOR. At the core of the evolving operations philosophy is the concept of ‘first responder’, with the capability and willingness to provide assistance. Such an approach has the potential to create an extended sphere of Indian influence in the IOR. Naval leaders recognise that benign missions help project Indian soft power and extend New Delhi’s influence in the littorals. Prompt response during humanitarian crisis helps generate political goodwill in the neighbourhood.

Yet, there is cause for caution. While low-end naval assets in humanitarian mode create strategic equity for India, prolonged presence of front-line warships in foreign waters has the potential to make partners anxious. Naval power, experts underline, must be deployed discreetly, shaping perceptions in subtle ways. The key is to not let the underlying intent of a mission appear geopolitical.

To ensure that motives aren’t misunderstood, and assistance provided is efficient and cost-effective, it is best to use dedicated disaster-relief platforms. However, unlike the U.S. and China that have in their inventory hospital ships fully equipped for medical assistance, India deploys regular warships and survey ships converted for medical aid. India’s improvised platforms do not match the U.S. Navy’s medical ship USNS Mercy or the People’s Liberation Army Navy’s Peace Ark that enable specialised medical services on a more visible scale.

The Navy’s expanding array of humanitarian missions reveals a need for greater coordination with the Indo-Pacific navies – in particular the U.S. Navy, the Royal Australian Navy and the Japanese Self-Defense Forces — which possess significant experience and assets to mitigate humanitarian threats.

As natural disasters in the IOR become more frequent and intense, India’s regional security role is likely to grow exponentially. At the forefront of disaster scenarios, the Indian Navy and Coast Guard would find themselves undertaking demanding missions. Humanitarian operations could serve as a springboard for a larger cooperative endeavour in the maritime commons.

Abhijit Singh is a Senior Fellow at the Observer Research Foundation and a retired naval officer.

Navy to the rescue

It's deleted. What was it about?

randomradio said:
It's deleted. What was it about?
Click to expand...

IN & MoD crackdown on Reliance Naval Engg by revoking BGs worth 1000 cr issues notices for cancellation of contract.
S

This has been happening since 2018 actually. Bank guarantee was withdrawn in installments since then.

_Anonymous_ said:
IN & MoD crackdown on Reliance Naval Engg by revoking BGs worth 1000 cr issues notices for cancellation of contract.
Click to expand...

The equipment was delivered as part of a £1m contract aimed at further improving the safety of submariners.

The contract is part of a commercial agreement signed between JFD and the Indian Navy.

JFD managing director Giovanni Corbetta said: “The provision of life-saving equipment delivered on time to the submarine rescue systems used by the Indian Navy further enhances their safety standards in the most remote and hostile environments.

“Providing the hyperbaric ventilators and D-MAS HyperSat further establishes our presence in India and we will continue to expand our investment, local presence and resources in the country in 2020 and beyond to develop our global supply chain to benefit our customers worldwide.”

Based on the data obtained with regard to the patients’ clinical vital signs, heart rhythm, blood pressure, SpO2 and core temperature, specialists will be able to assess and provide expert medical advice remotely.

JFD’s delivery of the equipment comes two years after it provided two complete third-generation fly-away submarine rescue systems to the Indian Navy in 2018.

Designed, manufactured, integrated and tested by JFD, the systems included all the logistics and support equipment required to operate the service.

JFD will also increase its in-country presence in India this year to support an all-inclusive maintenance support service agreement signed with the Indian Navy in March 2016 for 25 years.
JFD supplies two sets of life-saving equipment to Indian Navy