Bali78 said:
The Aridaman was supposed to be second SSBN. However, the second sub was named as Arighat.
Click to expand...

Yes, the name was dropped abruptly. Which is why I was wondering.

Gautam said:
Yes, the name was dropped abruptly. Which is why I was wondering.

Or is it a GHOST submarine...

It may be on deterrence patrol but we don't acknowledge it...

That's not Arihant for sure.
Reactions: screambowl and Paro 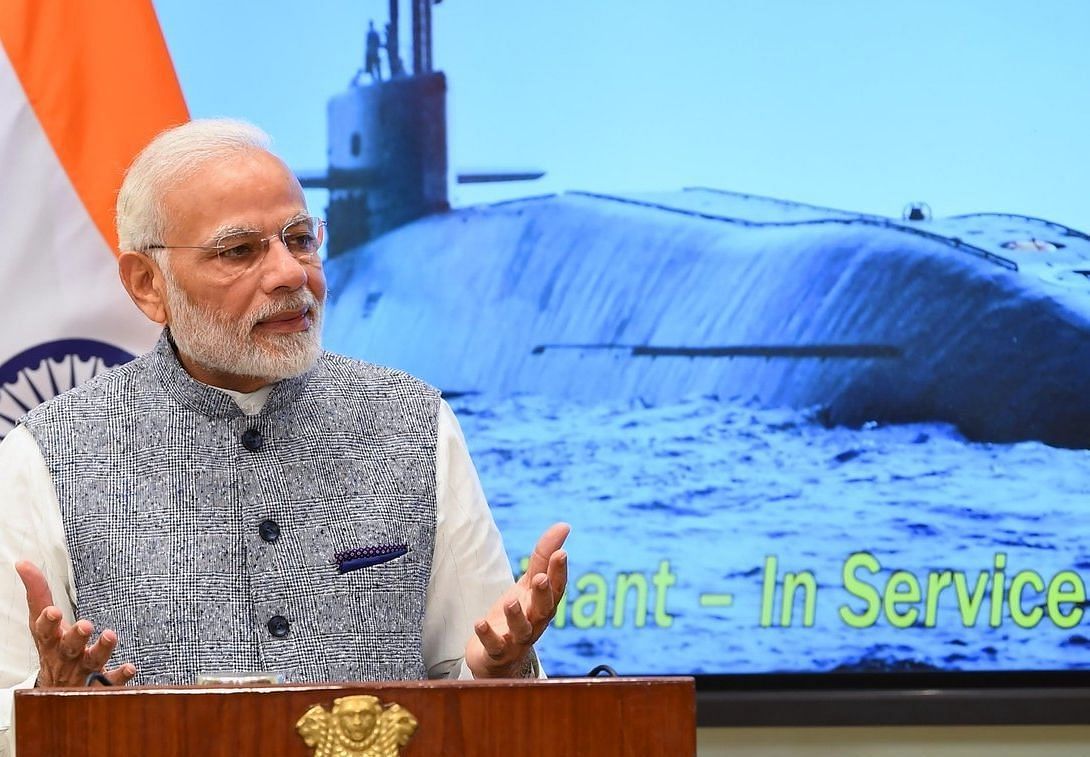 lcafanboy said:
http://****/s4-moved-from-dry-docks-to-fitting-out-dock-sea-trials-next/#more-249709
S4 moved out of dry docks for outfitting, to be followed by sea trials....

I D R W articles are banned out here. Don't ask me why. It's better if you could paste the entire article here.
Reactions: screambowl, Killbot and lcafanboy 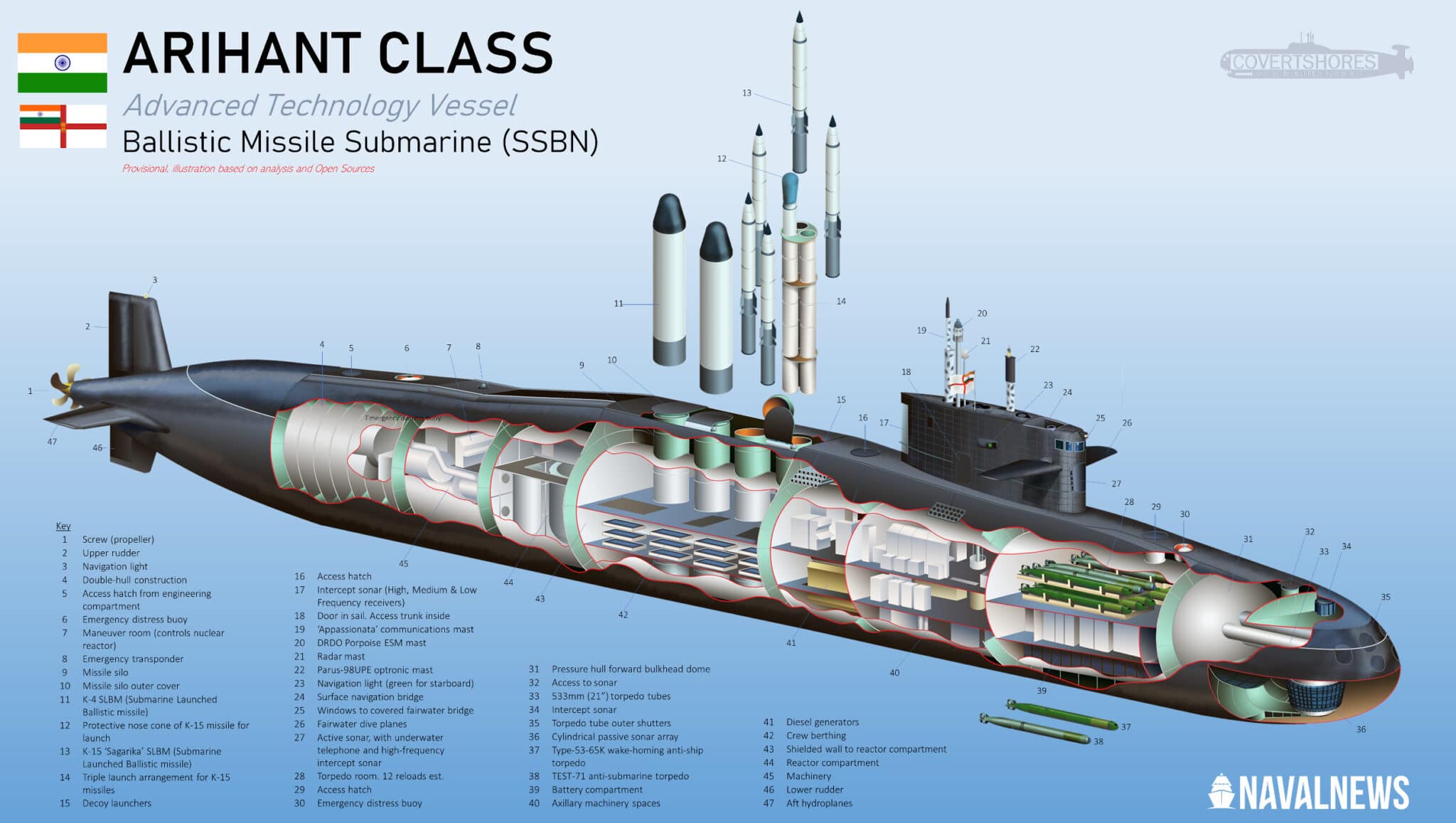 5 years after she was commissioned in 2016, the Indian Navy’s INS Arihant remains something of an enigma. Her existence is no secret, in fact it is a proud achievement of Indian industry. But photographs are very few. And nearly all those you will find on the internet are many years old. It is a very secretive submarine program.​

Few submarines are less photographed than India’s two Arihant Class ballistic missile submarines (SSBNs). The lead boat, INS Arihant (S2), was commissioned in 2016 and a second boat, INS Arighat (S3) is expected to join her in service this year.

The Arihant is a unique design which can be characterized as a ‘pocket boomer’. It is much smaller than other ballistic missile submarines (North Koreas’ conventionally powered boats excepted). Its hull is shorter and thinner than its contemporaries and it only carries four missile silos.

But this does not take away from the industrial achievement of an indigenous nuclear-powered submarine. And in many respects its modest size seems pragmatic. Other countries now taking the nuclear submarine path, such as Brazil, are also going for smaller types.

Analysis of the few photograph available confirm that some aspects of Arihant bear a strong resemblance to the Kilo Class. The upper sonar dome on top of the bow and many aspects of the sail are visually identical. And the hull diameter appears to match. In essence, the forward hull and sail are essentially similar to the Kilo Class. This makes some sense as India purchased 10 Kilos which are known as the Sindhughosh Class in service.

Several of India’s Kilos have been refitted with DRDO developed ‘USHUS’ sonar suites. It seems probable that the Arihant’s forward hull is so similar in order to leverage the USHUS sonar. This system, now improved to USHUS-2. was under development at the right time to be fitted to her.
USHS includes a cylindrical passive sonar in the chin, several intercept sonars, an obstacle avoidance sonar and an active sonar.

Overall the arrangement of the system is the same as the Russian systems originally fitted to the Kilo. However the intercept sonars in the trailing edge of the sail are arranged one above the other. This may explain the different shape of the sonar window seen there on the Arihant.

One visible difference between the bow on Arihant and the Kilo Class is the torpedo tube arrangement. Arihant’s are set lower. This indicates some internal differences and confirms that it is not literally a Kilo hull.

The design also has the forward hydroplanes moved to the sail, a position known as fairwater planes. The upper part of the casing has been raised to fair over the missile silos which are in the usual place behind the sail.

Behind the sail the missile compartment initiates the part of the submarine which is unlike anything on a Kilo. Four large-diameter missile silos are arranged in a single line. Initially these are fitted with triple tubes for the K-15 ‘Sagarika’ missile. This weapon is about 10 It can deliver a 1,000 kg warhead about 400 nautical miles.

K-15 is seen as an interim solution however. Each missile tube should be able to fit a single K-4 missile. The newer K-4 is a full-size SLBM (Submarine Launched Ballistic Missile). This is expected to have a range of around 1,900 nautical miles, almost 4 times that of the K-15. While shorter ranged than the SLBMs in service with more mature nuclear navies, it will move India’s at-sea deterrent up a notch.

It seems unlikely that a second Arihant class boat will change the Indian Navy’s attitude to submarine secrecy. But its commissioning may provide new clues to the classes’ capabilities. And any differences between the two boats. Also, the third of the class my emerge from its construction hall soon. The defense world is patiently waiting.
L

https://twitter.com/i/web/status/1393389798816059396
#Chinese #Naval magazine publishes detailed cutout drawings of #INSArihant . We don't have more than a few pictures of ins Arihant but Chinese have full details of ins Arihant.....
Reactions: TARGET, Tatvamasi, _Anonymous_ and 3 others

Good. The purpose of deterrence is served. Likewise we'd have details of their SSBN's & SSN's too. All the IN has to do is share it with some local news agency.
Reactions: Paro, Chain Smoker, Killbot and 2 others
L 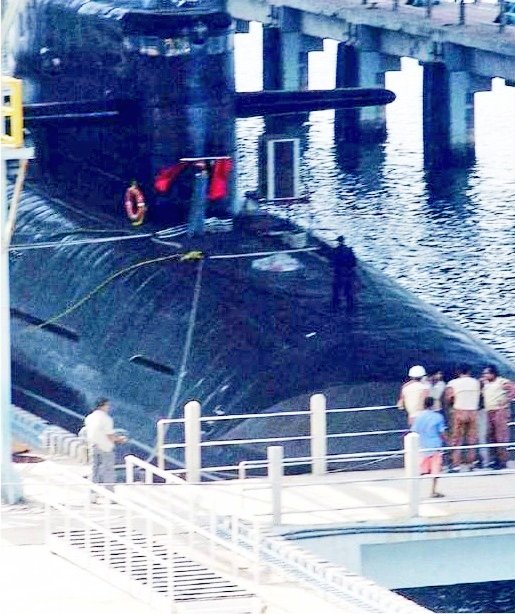 This pic is too old.

Tatvamasi said:
This pic is too old.
Click to expand...

Way too old... We have 4-5 images of Arihant so far in public domain with one video as well. That's it.

Rain of Deterrence: Construction in full swing for the naval base to house Indian Navy’s SSBNs and SSNs 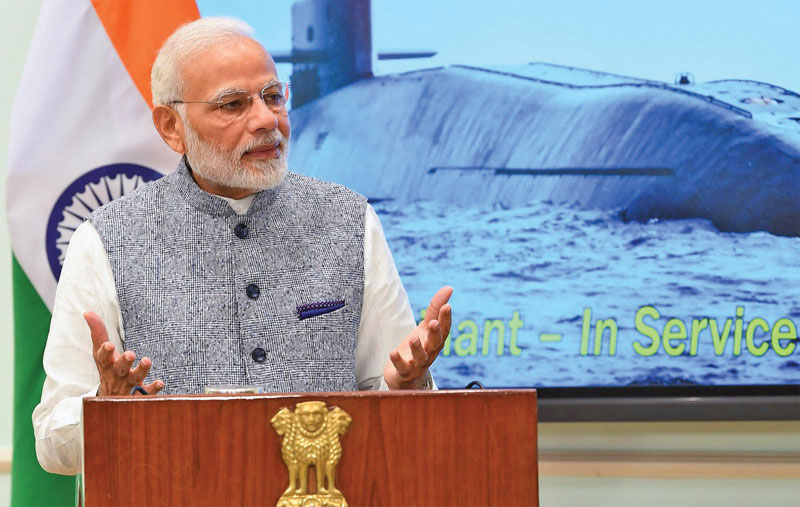 Both SLBMs and their warheads can be removed during routine maintenance or submarine overhaul. Every few years, warheads will have to be removed and serviced, typically for the replenishment of Tritium

lcafanboy said:
Rain of Deterrence: Construction in full swing for the naval base to house Indian Navy’s SSBNs and SSNs

Both SLBMs and their warheads can be removed during routine maintenance or submarine overhaul. Every few years, warheads will have to be removed and serviced, typically for the replenishment of Tritium

This is either INS Arihant (SSBN 80) or INS Arighat (SSBN 81). They are both identical so impossible to know from sat pics : 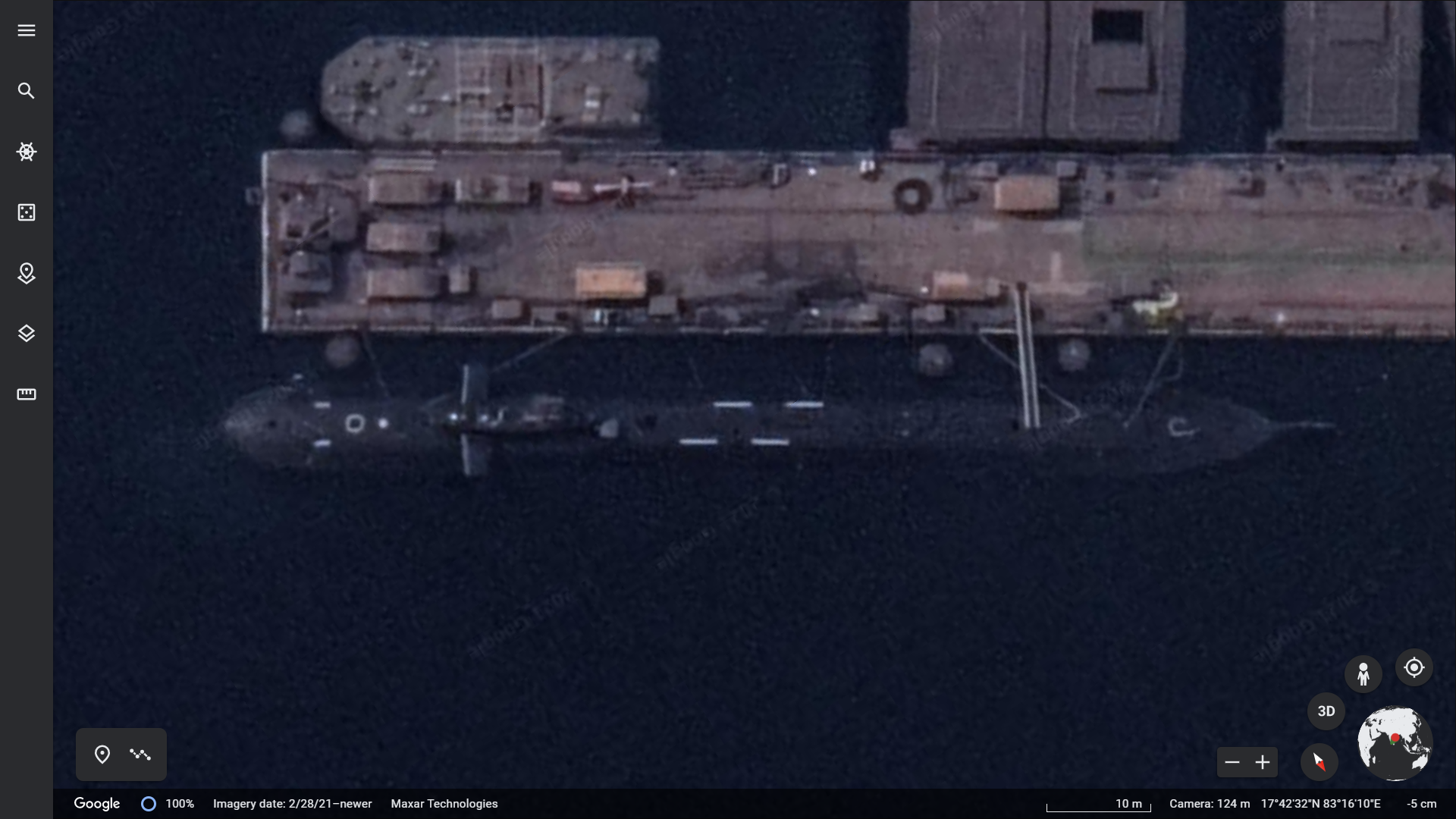 This is the S4 submarine. It has 1000 tons more displacement than the 1st two submarine of its class. The S4 is supposed to be launched this year. The last sub (called S4*) is still being constructed inside the shed. 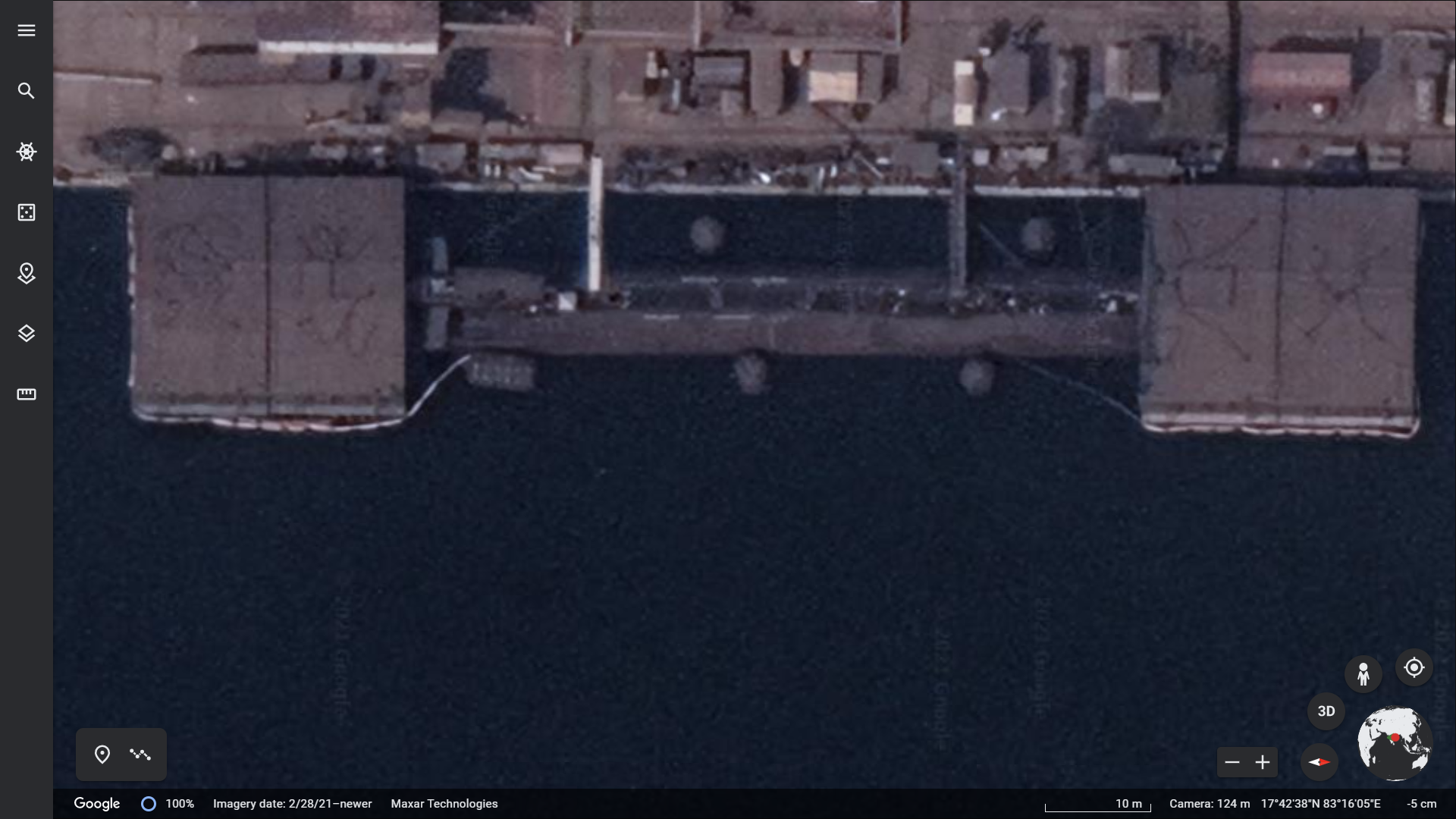 Reactions: Ashwin, Amal, SammyBoi and 5 others

Tatvamasi said:
5 years after she was commissioned in 2016, the Indian Navy’s INS Arihant remains something of an enigma. Her existence is no secret, in fact it is a proud achievement of Indian industry. But photographs are very few. And nearly all those you will find on the internet are many years old. It is a very secretive submarine program.
Click to expand...

Only for gen public. Otherwise governments of concerned countries would have already gathered some of operational and acoustic intelligence on it. Industrial intel out from L&T and others vendors is not an imagination but a possible reality.
Reactions: SammyBoi
Show hidden low quality content
You must log in or register to reply here.
Share:
Facebook Twitter Reddit WhatsApp Email Share Link
Top Bottom