Rahul Roushan (@rahulroushan) Tweeted:
Unpopular opinion: Akhand Bharat is not going to happen, instead another partition will happen, most likely in our lifetime. Don't screw yourselves again by choosing to remain secular. Vikas Bhadauria (ABP News) on Twitter (
https://twitter.com/i/web/status/1182146904714440705
)

ANI (@ANI) Tweeted:
Union Home Minister Amit Shah: Approximately 30,000 Bru refugees will be settled in Tripura. Rs 600 crore package has been given for this. ANI on Twitter ANI on Twitter (
https://twitter.com/i/web/status/1217786447685513216
)
Interesting thread.
Another shining example of secularism. After the successful ethnocide of Bengalis from Meghalaya, KPs from Kashmir, now it's the turn of the Reangs of Mizoram. We're still a secular state.

ꯃꯥꯀꯨ (@porbotialora) Tweeted:
Huge numbers of Mizos are illegal immigrants from Myanmar who get to stay because they are Christians and have adopted Mizo culture.

Meanwhile, the Reangs who opposed this were chased out of their homes and their land taken over by some trespassers from Myanmar. ANI on Twitter (
https://twitter.com/i/web/status/1217811944528211968
)
Reactions: hellbent

Governor Swaraj (@governorswaraj) Tweeted:
I am extremely happy with the signing of a tripartite agreement to resolve the Bru people who shuttled between Mizoram and Tripura. The media describes this as settlement of 23 year old problem. In my view this is a settlement of 125 year old problem. (
https://twitter.com/i/web/status/1217892982621270017
)

Very interesting thread on the Brus & Chakmas in our NE. For all those interested , from the NE & outside of it . @Gautam ; @hellbent
Reactions: Gautam and hellbent

_Anonymous_ said:
Governor Swaraj (@governorswaraj) Tweeted:
I am extremely happy with the signing of a tripartite agreement to resolve the Bru people who shuttled between Mizoram and Tripura. The media describes this as settlement of 23 year old problem. In my view this is a settlement of 125 year old problem. (
https://twitter.com/i/web/status/1217892982621270017
)

Very interesting thread on the Brus & Chakmas in our NE. For all those interested , from the NE & outside of it . @Gautam ; @hellbent
Click to expand...

Well much to my surprise and yours too possibly

Darn too many tribes

hellbent said:
Well much to my surprise and yours too possibly

I'm aware of the conditions of the bru tribe & the hostility they've faced at the hands of the Mizos since long . What I wasn't aware of were the details.
Reactions: hellbent

_Anonymous_ said:
I'm aware of the conditions of the bru tribe & the hostility they've faced at the hands of the Mizos since long . What I wasn't aware of were the details.
Click to expand...

So many tribes , missionaries and now Islamists have turned everything into a mess, actually those idealist fools who wrote the constitution are half responsible for it.
Reactions: Ironhide and _Anonymous_

_Anonymous_ said:
Governor Swaraj (@governorswaraj) Tweeted:
I am extremely happy with the signing of a tripartite agreement to resolve the Bru people who shuttled between Mizoram and Tripura. The media describes this as settlement of 23 year old problem. In my view this is a settlement of 125 year old problem. (
https://twitter.com/i/web/status/1217892982621270017
)

Very interesting thread on the Brus & Chakmas in our NE. For all those interested , from the NE & outside of it . @Gautam ; @hellbent
Click to expand...

Its a good development but if you think its the final solution you will be disappointed. The Brus are being settled in Tripura because they have had minimal conflicts with other tribes(Tripuris, Bengalis, Jamatia, et al) in the past. But it doesn't necessarily mean they will have no conflict in the future. Especially given where they are being settled. Have you heard of TTAADCs before ? Google it if you haven't. The Brus are going to be settled there.

The TTAADC covers nearly 68% of Tripura's land area. But most, if not all of that area is hilly. Tripura is a hilly state so its not surprising. Most of the plains and cultivable land doesn't fall under the TTAADC. Here in lies the problem. Remember we are an agricultural economy for the most part with some manufacturing and services here and there. In the early years 50-80s, we were an exclusively agricultural economy. Gas was discovered in large quantities after that. In those early years whichever part of the state had better agriculture advanced quicker economically. The plains prospered, the hills didn't.

The fact that the plains were dominated by the Bengalis didn't help the people to people relations. Many tribes got the feeling that the Bengalis prospered at the cost of the others. The state govt. sought opinions on how to solve this conundrum. The Bengalis suggested relaxing some laws regarding land ownership in certain parts of the TTADC to drive private investments. Of course private investors aren't going to put their money in a place where they can't buy land. Tripuris saw this as an attack on their culture/identity. They suggested the opposite, even stricter laws on land and property ownership. Then vote bank politics took over and the Tripuris got what they wanted. But the economic problems never went away. Any new avenues of business in the TTAADC would be quickly taken over by the plains. Look at rubber plantation for example. Until recently it was exclusively done in the hills. Then entrepreneurs in the plains found it economically viable. With in a matter of 5 years or so the plains are producing more rubber that the hills. Again this is not surprising given the infra, private capital, connectivity, labour and terrain advantages that the plains have. The situation got to a point where people in hills needed govt. help to sustain rubber plantations. Again the govt. obliged.

Now you have more people being settled there with govt. help. I wonder how this will end given the competition of resources. But you can be reasonably certain the Brus will vote for the BJP, the RSS has done good work there. Though that might come at the price of Tripuri votes.

The govt. both state and centre need to stop propping up unviable business models. I does us no good. Currently the situation is like this : The govt. announces a plan to support artisans producing bamboo crafts in the hills. An entrepreneur in the plains sets up a small scale industry hires some artisans from the hills, buys modern machinery, uses existing infrastructure to gain a boost in business. A month or so later the entrepreneur is selling bamboo crafts in India and in some cases Bangladesh using border markets. Whereas the artisans in the hills are still waiting for the govt. to bless them with money. If you know anything about our bureaucracy you know where this is going. So now what ? People lose hope. The artisans from the hills move to the plains and gets employed in the same company that out-competed him in the past.

This is the case with everyone of our industries. Rubber, bamboo craft, bricks, cement, wood, agriculture, gas, services you name it. No wonder Tripuris feel that the plains(and by extension Bengalis) are growing at their expense. So what do you do ? Smarter people would say ease up laws to allow private investment, tourism etc. But politicians are hardly that smart here. They wanted more protectionist laws in their favour. How will that help ? Who cares ? Some want a Tripuri CM, never mind votes and democracy and all that. Some go on to the extent of asking for a separate state exclusively for the Tripuris. As if that's going to solve anything. All they have to do is ask why they needed to shift to the plains despite all the protectionist laws in the TTAADCs. Maybe the laws are doing no good.

This migration is very visible today. Especially around Agartala, given its the capital it draws in all people. If moving to the Bengali dominated Agartala doen't harm culture and tradition of the tribes and it acceptable, why is the opposite unacceptable ? The Bengalis clebrate many Tribal fetivals with great pomp and enthusiasm. How come that doesn't effect Bengali identity ?

Anyway I am going off track. I'll stop.
Reactions: Sulla84, hellbent, Ashwin and 1 other person

Another goldmine of information for all those in mainland India & I suspect quite a few in the NE too interested in the history, culture, economy & political development in the NE. I think those interested ought to follow this gentleman. Btw his name is Swaraj Kaushal & he's the husband of the late Sushma Swaraj. 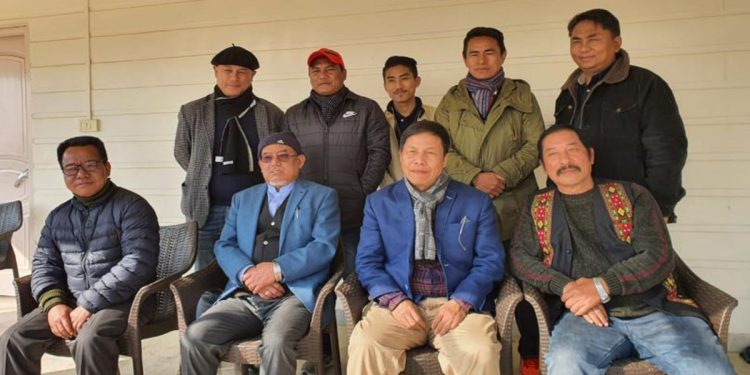 In a significant move, the working committees of Naga National Political Groups (NNPGs) and Kuki National Organisation (KNO) kept aside their differences and signed a joint declaration to work together.

It may be mentioned that both the organizations separately negotiate political settlements with the central government.

After ethnic conflicts between the two communities – Kuki and Naga – in the early 90s, the armed militant groups for the first time have come out openly to work together.

A joint statement issued by NNPGs convener N Kitovi Zhimomi and KNO president PS Haokip said the declaration was signed between the two sides after a meeting in Imphal on January 10.

The joint statement was issued after thorough deliberation and discussion on the contentious political, social and inter-community matters prevailing for decades in Manipur.

After the discussions, they agreed to “work together closely in resolving difference through the democratic political process thereby the history and identity of one is respected and acknowledged by the other, now and in the future.”

As per media reports, the two groups also decided to appraise each other from time to time of issues that can have socio-political ramifications for one community or the other.

KNO spokesperson Dr. Seilen Haokip termed the development as “the foundation of peace” between the Kukis and the Nagas.

Haokip said: “When two different political groups are keen on co-existence, naturally they converge towards building peace. We don’t want to be enemies with anyone. I hope others will also follow suit.”

While NNPGs is an umbrella body of seven Naga militant outfits that have been holding talks with the Centre since 2017.

KNO is one of two umbrella bodies of 17 Kuki militant outfits who are currently holding peace talks with the Centre.

The demand of the KNO is a separate Territorial Council in Manipur.

Aakash (@Ateendriyo) Tweeted:
Shourie, for all his ideological meanderings, first brought this sorta mindless judicial monstrosity to notice. In his book, Anita Gets Bail. Chayan Chatterjee on Twitter (
https://twitter.com/i/web/status/1219620822593212416
)

Some of the most interesting developments have always occurred in WB & Kerala. Since 2015 in Delhi & since 2019 in Maharashtra.

ꯃꯥꯀꯨ (@porbotialora) Tweeted:
Watch how the Church will use this against the Chakmas while legalizing illegal Chins that came from Myanmar and are residing in the state simultaneously.
MIZORAM CM MEETS MODI, SEEKS INTERVENTION FOR CENTRES NOD TO NRC-LIKE BILL - Republic World (
https://twitter.com/i/web/status/1220710529653559298
)
Show hidden low quality content
You must log in or register to reply here.
Share:
Facebook Twitter Reddit WhatsApp Email Share Link
Top Bottom