General Atomics has offered new details about Sparrowhawk, which is designed to be launched and recovered in mid-air, including from other drones. Lockheed Martin received $62 million for the engineering phase of PrSM following a successful milestone B evaluation. The Army’s initiative to generate long-range fires frays when stacked against conventional air and naval options. The manufacturing plant is the third digital factory opened by the world’s largest defense contractor this year.

The laser system could offer the already super versatile AC-130J a new way to covertly destroy and disable critical targets. The hypersonic missile era is about to officially begin for the U.S. Army. THOMAS NEWDICK View Thomas Newdick's Articles
@CombatAir
The U.S. Army is moving closer toward fielding its first Dark Eagle hypersonic missiles, also known as the Long Range Hypersonic Weapon, with the recent delivery of prototype trailer-mounted launchers, as well as other key components of the complete weapon system. In doing so, the Army has also confirmed that Joint Base Lewis-McChord in Washington State is the home of the first unit intended to be equipped with these weapons, something the service has been very tight-lipped about in the past.
Joint Base Lewis-McChord's public affairs office posted a series of pictures online yesterday showing the arrival of the launchers, but the accompanying metadata says that they were all taken on either Sept. 14 and 15 of this year. A common caption attached to each one of the images says that there will be an official ceremony to mark the formal delivery of these trailer-mounted systems to the 5th Battalion, 3rd Field Artillery Regiment, tomorrow. U.S. ARMY/SPC. KARLESHIA GATER
This tractor/trailer combination was among the prototype hypersonic hardware to arrive recently at Joint Base Lewis-McChord, Washington.

Though no actual missiles have been delivered to the unit, so far, the launchers and other equipment will allow soldiers to familiarize themselves with various aspects of the LRHW and the general operation of the weapon system. It will also help support the development of the tactics, techniques, and procedures (TTPs) needed to employ the missile in real-world scenarios. U.S. ARMY
A U.S. Army infographic showing the basic components of the LRHW, as well as a notional firing battery. Some of these components have now been delivered, in prototype form, to the Army at JB Lewis-McChord.
“It’s going to be a battery of four launchers, two missiles per for basic load of eight,” Bob Strider, Deputy Director of the Army Hypersonic Project Office, said at the annual Space and Missile Defense Symposium in August. “It’s going to be a Battery Operations Center — that’s our C2 system that is based against an AFATDS, the [Advanced] Field Artillery Tactical Data System …. with a support vehicle."
"This will be a road-mobile system, which is critical, the ability to move around the battlefield,” he added.
While we still don’t know the official designation for the initial LRHW unit, the latest photos reveal that at least some of the launchers have been given individual names, including Hyperion. In August, the Army had also revealed that it had given the name Dark Eagle to the forthcoming missiles that these launchers are intended to fire.

U.S. ARMY/SPC. KARLESHIA GATER
Soldiers and contractors pose in front of a prototype LRHW launch trailer, named Hyperion.
Back in March, when the Pentagon announced the delivery of the first two inert missile canisters, it was stated that “all additional ground equipment” for the LRHW prototype battery would also be delivered this year, suggesting that components at Joint Base Lewis-McChord may now constitute a complete system, with the exception of the missiles. Regardless of that fact, the prototype hardware delivered so far is intended for training use only.
It was previously reported that the Army anticipated tests of its prototype LRHW battery to start in Fiscal Year 2022, which began this October 1. The Army meanwhile plans to complete the fielding of a first operational battery, including live missile rounds, in Fiscal Year 2023. U.S. ARMY/SPC. KARLESHIA GATER
While the Army has previously fielded ballistic missiles capable of hitting hypersonic speeds — generally classed as anything over Mach 5 — the LRHW, once in service, will be the service’s first purpose-built hypersonic weapon.
Development of the LRHW has involved the Army and the Navy, with the maritime branch using the same hardware in its Intermediate-Range Conventional Prompt Strike (IRCPS) weapon. While the launcher platforms for LRHW and IRCPS are different, the missiles themselves are the same, including a Common Hypersonic Glide Body, or C-HGB, and rocket booster.
Video of a joint U.S. Navy and U.S. Army test launch of a C-HGB hypersonic glide body from the Pacific Missile Range Facility, Kauai, Hawaii, in March 2020:


In its statement on the prototype LRHW delivery, the Army says the weapon, once fielded, will “provide a unique combination of speed, maneuverability, and altitude to defeat time-critical, heavily defended, and high-value targets.” As far as speed is concerned, the Pentagon has previously said that the C-HGB will be capable of reaching a maximum speed of Mach 17. It also said it would be able to strike targets at a distance of at least 1,725 miles.

U.S. ARMY/SPC. KARLESHIA GATER
The maneuverability mentioned by the Army is another key attribute of new-generation hypersonic missiles, with the C-HGB able to make more unpredictable maneuvers, compared to traditional ballistic missiles, complicating an adversary’s ability to defend against it. The potential game-changing aspects of hypersonic weapons are something that The War Zone has discussed in depth in the past.
The LRHW’s hypersonic capabilities are a critical part of the Army’s broader Long Range Precision Fires effort, or LRPF, which it describes as its “number one modernization priority.” Among others, this initiative aims to give artillery units a new long-range and deep-strike capability, including replacing the Army Tactical Missile System (ATACMS) now in use. ATACMS is a relatively small ballistic missile with a maximum range of around 190 miles and is set to be directly replaced by the Precision Strike Missile. U.S. ARMY/SPC. KARLESHIA GATER
…and is then attached to an M983A4 tractor unit.
As The War Zone has examined in the past, hypersonic weapons, in general, are fast becoming seen as an important component of U.S. Indo-Pacific Command’s future warfighting strategies, above all to counter China’s expanding military capabilities in the region. LOCKHEED MARTIN
An artist’ conception of an LRHW being fired from its trailer-mounted launcher.
Earlier this year, the Pentagon submitted a plan to Congress outlining more than $27 billion in proposed spending over the next six years to bolster capabilities across the Pacific region to deter China. Fundamental to this Pacific Deterrence Initiative, or PDI, will be forward-deployed long-range strike capabilities. While these would include ground-based cruise missiles and ballistic missiles, hypersonic missiles — like LRHW – would be expected to play a central role.
The decision to base the first LRHW systems at Joint Base Lewis-McChord also speaks to the importance of this theater, the west coast location allowing the missiles to be rapidly positioned to contribute to future exercises or contingencies in the Pacific, including via the base’s resident C-17 airlifter fleet. Furthermore, the base is also home of the first Multi-Domain Task Force, another concept created with Pacific operations in mind, and which is ultimately intended to include a Strategic Fires Battalion equipped with HIMARS launchers and “mid-range” missiles, as well as LRHW. U.S. ARMY
A graphic depicting the organization of a notional complete Multi-Domain Task Force, which includes a battery equipped with the LRHW, among other things.
However, the Army’s plans for fielding and employing LRHW develop, and regardless of where future batteries are deployed, the arrival of the first prototype launchers, and other hardware, at an Army installation is a critical step in the service’s path toward fielding hypersonic missiles. 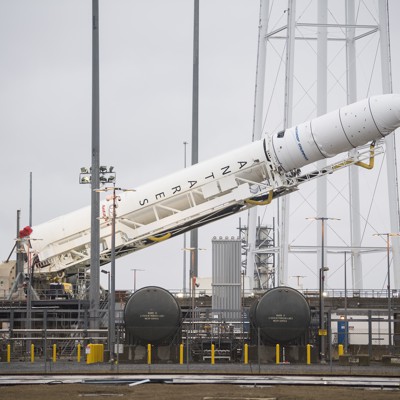 Hypersonic Missile Defense May Depend on Low Earth Orbit Satellites

Sensors in relatively low orbits may be the best way to spot superfast missiles—but they can’t do the job alone.

Just a matter of time ,we will soon see flying ones. A ground unit for hunting & air unit for observing paired with each other would make excellent battle bot companions for troops.

@Mods please correct the title of this thread. It has been written in Pakistani English. The correct word is Inducted and not Indicated.

vstol Jockey said:
@Mods please correct the title of this thread. It has been written in Pakistani English. The correct word is Inducted and not Indicated.
Click to expand...

????? The title of this thread is 'US Military Technology', there is no 'Inducted' or 'Indicated'.

BMD said:
????? The title of this thread is 'US Military Technology', there is no 'Inducted' or 'Indicated'.
Click to expand...

shit. I wanted this post on the thread about induction of new SAMs by pakistan. God only knows how I ended up posting it here. Thanks for correcting me @BMD.
Reactions: BMD

US military launches 3 suborbital rockets in test of hypersonic technologies