The Indian Navy’s first domestically developed and built nuclear-powered ballistic missile submarine (SSBN), INSArihant, and the Scorpene-class (Kalvari-class) diesel-electric submarine (SSK) INS Kalvari still do not carry modern heavyweight torpedoes as a result of a long-delayed procurement process that began over a decade ago.

Torpedoes are a submarine’s principal weapons systems for attacking and defending against enemy attack submarines and surface warships. For the time being, subs of the Arihant-class and Kalvari-class are expected to be armed with older less effective torpedoes leaving India’s underwater force more vulnerable to enemy actions in the event of a conflict in the near future.

The Indian Ministry of Defense (MoD) is expected to discuss the acquisition of new torpedoes during a high level meeting in the coming days, according to Indian media reports. “A high-level meeting of the Defense Ministry is expected to discuss the proposal to acquire heavy-weight torpedoes for the INS Arihant nuclear submarine and the submarines of the Kalvari-class of the Indian Navy,” a source in the Indian Navy was quoted as saying by ANI News on January 30.

However, defense observers don’t believe that this will lead to an expedited procurement process. The Indian MoD has issued its latest request for information over a year ago, but so far has not issued an official tender. The Indian Navy is reportedly currently evaluating German SeaHake and French F21 Artemis heavyweight torpedoes. The MoD cancelled an order for 98 Black Shark torpedoes in 2017 following a corruption scandal. As I explained at the time:


[India’s MoD] (…) canceled the order for Black Shark heavyweight torpedoes, built by torpedo maker Whitehead Alenia Systemi Subacquei (WASS), a subsidiary of Italian arms manufacturer Finmeccanica, due to corruption allegations involving another Finmeccanica subsidiary, Agusta Westland. According to the Indian MoD, Agusta Westland representatives allegedly paid bribes for a 2010 purchase of 12 AW medium lift helicopters, which resulted in the termination of the contract in 2014 and the purported blacklisting of the company.​
​
The Black Shark torpedo was specifically to be procured by the Indian Navy for service aboard the subs of the Arihant and Kalvari class. According to MoD officials, there has been some discussion over reviving the Black Shark deal.

The Indian Navy has also ordered 73 domestically-produced Varunastra 533 millimeter heavyweight torpedoes, although it is unclear when serial production of the new weapon system will commence. Bharat Dynamics Limited obtained a license to manufacture the Varunastra torpedo from India’s Defense Research and Development Organization (DRDO) last April. The torpedo is currently adopted to fit the torpedo tubes of Kilo-class (Sindhughosh-class) diesel-electric submarines.

Notably, the Varunastra along with the Indian Navy’s existing stock of Russian-made torpedoes cannot be fired from the Arihant-class or Kalvari-class without torpedo tube and software modifications. It is unclear whether these modifications are currently underway on the first-of-class INS Arihant and INS Kalvari.

Varunastra is a ship launched torpedo

The under development electrical heavy weight torpedo EHWT is the one purpose built to be launched from submarines. 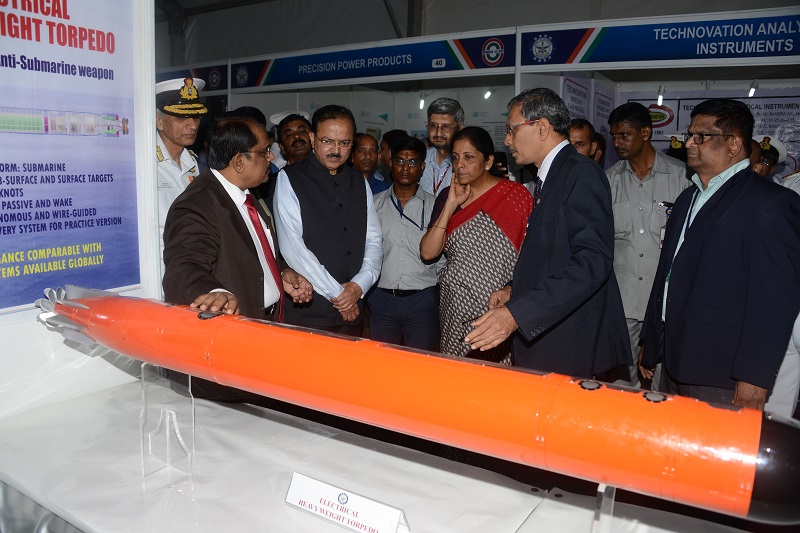 Varunastra is a ship launched torpedo

The under development electrical heavy weight torpedo EHWT is the one purpose built to be launched from submarines.

Yes but the author is not Indian so we can slide it. Still, scorpene will need some modification in its combat system and torpedo tubes also to launch these.

Its a fibre-optic wire guided 533mm x 6.4m submarine-launched torpedo along with Ring Laser Gyro INS guidance as well as GPS based guidance.

In a major boost for the Navy's firepower, the Defence Ministry has approved the acquisition of more than 100 heavyweight torpedoes which will be equipped on the force's six Scorpene-class submarines being built at Mazagon Dockyards in Mumbai.

"The proposal for acquiring heavyweight torpedoes for the submarines for the Indian Navy was cleared at a high-level meeting of the Defence Ministry and a tender is expected to be floated soon by the government in this regard," defence sources told ANI.

As per the details of the project, the immediate requirement of the Navy for heavyweight torpedoes will be met by the acquisition to be made through the foreign vendors while the long-term bulk requirement will be fulfilled through the Made in India route.
Reactions: Sathya and R!cK
Show hidden low quality content
You must log in or register to reply here.
Share:
Facebook Twitter Reddit WhatsApp Email Share Link
Top Bottom