Indo-Bangla rail link project: India begins installing rail lines at Haldibari
The barbed wire fences separating the two countries were cut by Indian Railways with BSF and BGB present
The Indian Railways has begun to install rail lines at No Man’s Land between Nilphamari’s Chilahati and Jalpaiguri’s Haldibari, promoting connectivity between Bangladesh and India with these two passenger train routes.

Chief of Public Relations for North-East Indian Railways, Suvananda Chandra said: “We are installing the rail lines to establish an easier connectivity between the two countries on train routes.”

“We hope to finish the installation by September 30,” added the officer.

A team of Border Security Force (BSF) troopers and local police have nabbed two drug smugglers with ecstasy drug near India-Bangladesh border at South Salmara district in Assam. “In a joint operation with police and apprehended two Indian drug smugglers along with 3800 Yaba tablets on Saturday (S

Tripura: Trial run vessel with 50 MT cement through protocol route begins from Bangladesh
Agartala: The first vessel with consignment of around 50 tons of cement for Sonamura in India has left from Munshiganj Bangladesh, announced Tripura chief minister Biplab Kumar Deb.

Taking to twitter Deb informed, “First Vessel with consignment started its trial run today from Munshiganj, Bangladesh for Sonamura port, Tripura. With the successful run, Indo-Bangla waterways will open up new avenues for economic development in both the countries where Tripura will play an important role," he wrote.

The small vessel in its first trial run started on Thursday left from Narayanganj through river Meghna in Bangladesh carrying 50 tons of cement from Premier Cement Company of Bangladesh.

The Sonamura-Daudkhandi stretch of Gumti River (93 km) was approved as India-Bangladesh protocol route on May 21 with the signing of 2nd addendum in Dhaka by Riva Ganguly Das, high commissioner of India in Bangladesh, and
Mohammed Mezbah Uddin Chowdhury, secretary to ministry of shipping, Bangladesh.

Earlier on August 24, chief minister informed that the trial run in the Sonamura-Daudkandi inland waterways protocol route would be conducted in the first week of September.

During the trial run, 50 MT cement will be transported in a barge from Dhaka to Sonamura. This is the first time any goods will be reaching Tripura by ship.

The Indo-Bangla traders on August 11 had demanded a trial run within August through the newly sanctioned inland waterways protocol route.

Visiting the port site where the work for commissioning the inland waterways connectivity On May 29, chief minister Deb said, “Both India and Bangladesh signed the agreement and have decided to start the trade amidst the pandemic. I hope that ships will start from the temporary jetty which is being set up in 3 to 4 months.”

The export cargo from India to Bangladesh is mainly fly-ash which is to the tune of 30 lakh MT per annum. Around 638 inland vessels (including 600 Bangladeshi flag vessels) completed with approximately 4,000 loaded voyages annually.

The chief minister on July 23 said that currently the state imports goods worth over Rs 645 crore, with exports at Rs 30 crore. “With the connectivity between the state, in next one year the export is likely to cross Rs 400 cr, and import would be of over Rs 2,000 crore, while in five years the import is likely to cross Rs 4,200 crore mark and export of over Rs 1,200 crore," Deb added. 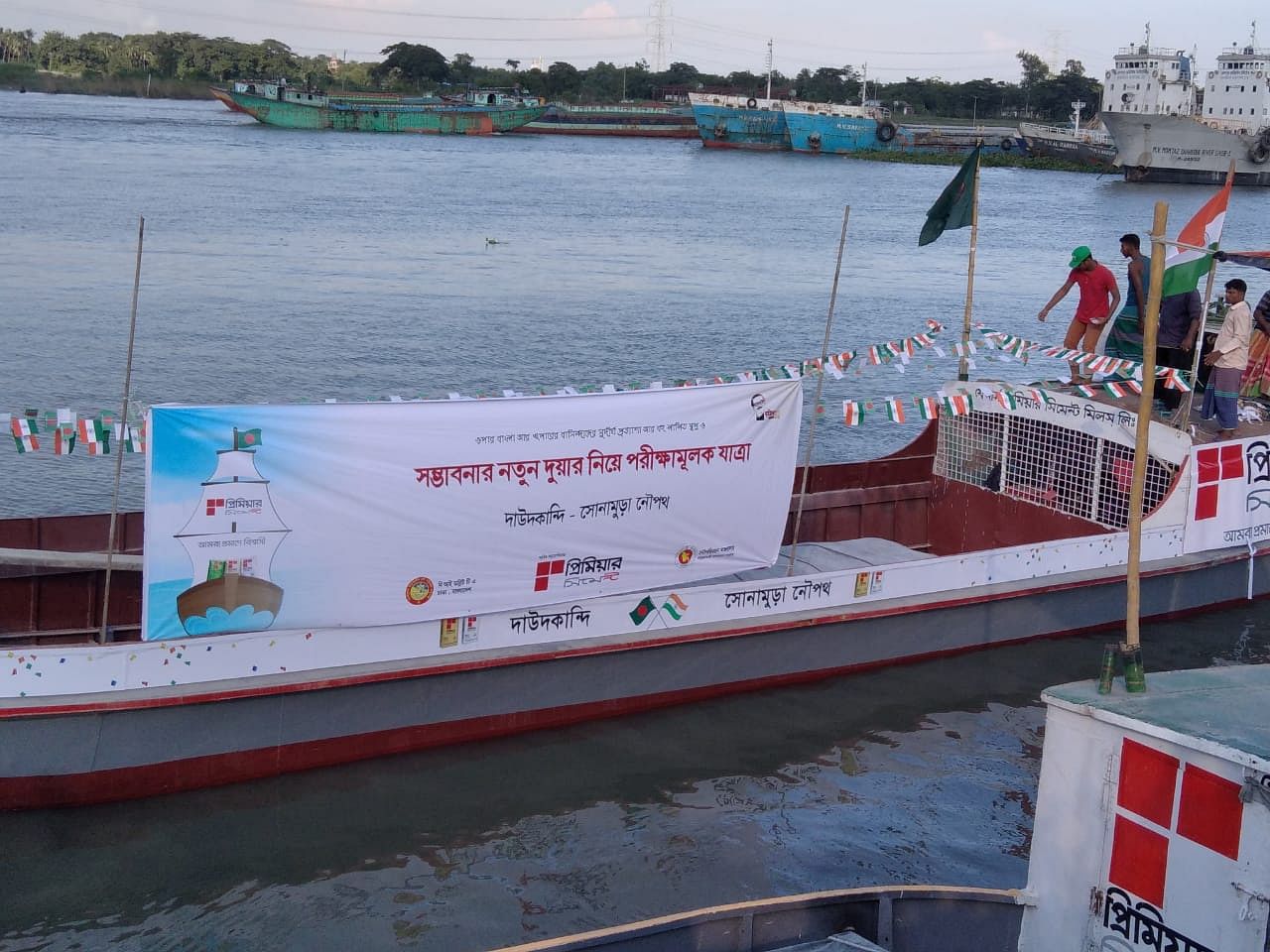 India-Bangladesh Rail Link Work Likely To Be Completed By December: Official
A defunct railway link with Bangladesh is being revived with work on the Indian side of the border from Haldibari in north Bengal likely to be completed by December, a railway official said on Monday.

The railway line from Haldibari to Chilahati in Bangladesh has been defunct after rail links between India and then East Pakistan had snapped in 1965.

"On our side, tracks are ready and other works such as construction of buildings and other ancillary things will be done by December," the NFR spokesperson said.

The leadership of India and Bangladesh have stressed on the revival of pre-1965 rail links between the two countries and some of them are already functional.

Work of laying single-line tracks is almost done on the Indian side from Haldibari in the Jalpaiguri district, the North East Frontier Railway official said.

A new cross-border train route will start between New Jalpaiguri in Siliguri in India and Dhaka in Bangladesh from 26 March, the Independence Day of Bangladesh.

This is the third passenger train service between the neighbouring nations, after Maitree express and Bandhan express.

Bilateral talks between the officials of Bangladesh Railway and Northeast Frontier Railway (NFR) were held on 21 February to chalk out the modalities of the route.


Later, they also jointly visited the Haldibari-Chilahati route that resumed after a gap of over 55 years.

"A new passenger bi-weekly train having ten number of coaches will be started from New Jalpaiguri for Dhaka, Bangladesh on 26 March. The train will have 10 coaches. including six two-tier and two AC chair cars," said Verma.

The Bangladeshi delegation said that the residents of the country have repeatedly raised their demand for communications through roads and railway links with India.

"Bangladesh and India have a very good friendship and relation since the Independence of Bangladesh," said Shahidul Islam, adding that people's issues led to a dialogue about the rail route with the Indian government.

He also informed that their government is planning to start railway services with Nepal and Bhutan in near future.

The route between Haldibari in Cooch Behar and Chilahati in northern Bangladesh was reopened after 55 years in December. The railway line had been defunct after rail links between India and then East Pakistan had snapped in 1965.

Bilateral talks between the officials of Bangladesh Railway and Northeast Frontier Railway (NFR) were held on 21 February.The Prime Ministers of both countries will jointly inaugurate the passenger train service

Delhi reaches out to Dhaka for ties beyond ‘strategic partnership’

Indicating the frank conversations he had with his Bangladesh counterpart, Foreign Minister A K Abdul Momen, Jaishankar said: “Our comfort levels are now so high that we have shown that there is no issue that we cannot discuss and resolve through amicable dialogue.” 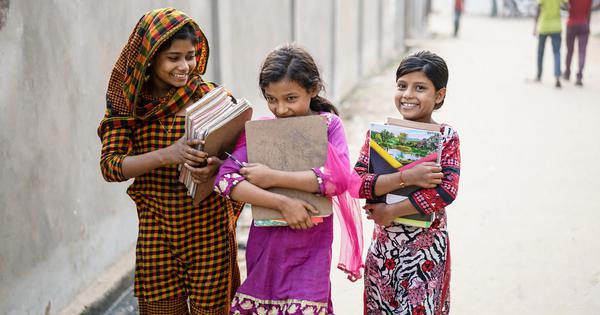 A good take down by a Bangladeshi about "Chinese taking over BD" stories by many indian media outlets.

A good take down by a Bangladeshi about "Chinese taking over BD" stories by many indian media outlets.
Click to expand...

It's indeed a good article. Only thing he missed is about airport project handover to China so close to NE border.

RISING SUN said:
It's indeed a good article. Only thing he missed is about airport project handover to China so close to NE border.
Click to expand...

A good take down by a Bangladeshi about "Chinese taking over BD" stories by many indian media outlets.
Click to expand...

That India has it's suspicions about China's growing clout in BD isn't even news. That it's a fact isn't news too. That BD is balancing out both powers playing one against the other just like Nepal & unlike the current dispensary in SL also isn't news. That all this is happening under Shaikh Haseena as pro India a leader as we can expect isn't news either.

Left unsaid is what happens after her where her successors in the Awami League aren't expected to rise up to the occasion & stay in power added to the anti incumbency factor bringing in the other factor in BD politics - the other begum to power along with her allies the JeI. They don't even pretend they're on amicable terms with India.

He quotes The Hindu & an anonymous tweeter Sonali Ranade in support of his arguments both vehemently anti Modi & certified card carriers of the Communist brigade. The latter is a particularly rabid Modi hater who's writing for a Congress mouthpiece The National Herald which in turn is reproduced in Scroll . I mean give me a break.

The pet agenda of all these players is to constantly undermine & show the present government in bad light. In doing so if it damages the national narrative on sensitive topics, so be it.

Going thru his T/L, he wonders if India can have a no visa exchange policy with Nepal permitting it's citizens to work in India & vice versa why can't it have the same arrangement with BD.

I don't think we'd ever quite come out of our fascination for having Westerners prescribe what's good for us or even stop treating their word as gospel. Not for another few generations, I guess.
Reactions: RISING SUN
Show hidden low quality content
You must log in or register to reply here.
Share:
Facebook Twitter Reddit WhatsApp Email Share Link
Top Bottom