Amid fury in Paris, Macron warns EU of institution crisis over Commission jobs

Amid fury in Paris, Macron warns EU of institution crisis over Commission jobs 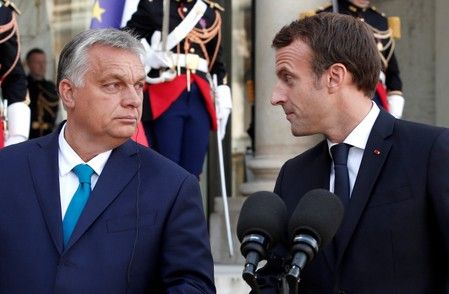 PARIS (Reuters) - French President Emmanuel Macron spoke on Friday of a "political crisis" between the EU's executive and its parliament after lawmakers rejected his pick for commissioner, while members of his party blamed a leading German conservative for the debacle.

The lawmakers on Thursday emphatically rejected Sylvie Goulard, Macron's pick to head industrial policy in the next European Commission over her role in a jobs scandal, in which she denies wrongdoing, and her past work as an adviser for a U.S. think-tank which paid her more than 10,000 euros a month.

Their move could potentially delay the start of the new Commission, which is due to take office on Nov. 1, and curb the influence of France, the European Union's second biggest economy and a founding member of the club.

Each EU member state nominates a candidate for the Commission who must then pass a confirmation hearing in the European Parliament.

"We must not allow a European political crisis to escalate," Macron told reporters before a meeting with Hungarian Prime Minister Viktor Orban at the Elysee palace in Paris.

He said a Europe consumed by "its own petty wars" would become a weaker power on the global stage.

Privately, French officials are seething and accused Manfred Weber, a German conservative member of the European Parliament, of orchestrating Goulard's downfall as revenge after Macron scuppered his hopes of becoming the next Commission president.

"There's vengeance and resentment, and we feel we're paying the price of tactics by the (conservative) European People's Party, which are alien to us because we're newcomers," a source within Macron's party told Reuters.

Weber's entourage denied they acted out of revenge.

"The EPP group always insisted on the seriousness of the procedure because the European Parliament has an important democratic role to play with these confirmation hearings," an EPP official said.

Another source close to Macron said "anti-French" sentiment among countries in Germany's orbit also played a role in Goulard's rejection, reflecting a sense that Macron had acquired too much influence in the incoming executive.

It was Macron who successfully proposed Ursula von der Leyen, another leading German conservative, to become the next Commission president, and Goulard received a huge portfolio overseeing the EU internal market and European defense integration.

(Bloomberg) -- Polish voters kicked off a general election that’s expected to give the ruling party four more years to cement a radical transformation of the country from one of Europe’s biggest successes into a problematic renegade.

Campaigning on a nationalist platform that mixes generous welfare handouts, the demonization of immigrants and gays, and tirades against the European Union’s liberal, multicultural values, the Law & Justice party has a strong lead in opinion polls over the fractured, mainly pro-EU opposition.

(Bloomberg) -- The conflict between Poland and the European Union over democratic principles escalated overnight as the bloc’s highest official in Warsaw was summoned to the Foreign Ministry.

Following an “unacceptable comment” by EU Commission spokesman Christian Wigand, the head of the commission’s office in the country was summoned to a meeting at the Polish Foreign Ministry on Saturday morning, Deputy Foreign Minister Pawel Jablonski said on Twitter late yesterday.

“The EU is a community of law and can’t passively watch threats against judges,” Marek Prawda, head of the commission’s office in Poland, told reporters after the meeting, which lasted less than 30 minutes. He said the discussion was constructive and also involved the details of next week’s visit by EU Commission Vice President Vera Jourova to Poland.

Luxembourg can afford to with the free handout it gets from the EU each year.