The Nightmare COVID Variant That Beats Our Immunity Is Finally Here

Photo Illustration by Erin O'Flynn/The Daily Beast/GettyA new subvariant of the novel-coronavirus called XBB dramatically announced itself earlier this week, in Singapore. New COVID-19 cases more than doubled in a day, from 4,700 on Monday to 11,700 on Tuesday—and XBB is almost certainly why...

Social media posts shared tens of thousands of times claim researchers at Boston University have created a new, more deadly variant of the coronavirus. But the university’s scientists say this is a misinterpretation of their study, which was released ahead of peer review -- and independent experts told AFP the research did not lead to a more dangerous virus.​

"ARREST THEM NOW: Boston University Doctors Create New COVID Variant that Has 80% Kill Rate – Funded by Dr. Fauci and NIH," says the headline of an October 17, 2022 article from the Gateway Pundit, a website that has repeatedly published health misinformation.

The article accumulated more than 2,500 shares on Facebook and was featured in several videos, including one with more than 19,000 views on Rumble and 11,400 views on Bitchute.

"US researchers have developed a new lethal Covid strain in a laboratory -- echoing the type of experiments many fear started the pandemic," the Rumble video claims, citing October 17 reporting from the Daily Mail.

The British tabloid quoted experts questioning why the US helps fund gain-of-function research -- or studies that can improve "the ability of a pathogen to cause disease," according to the US Department of Health and Human Services. 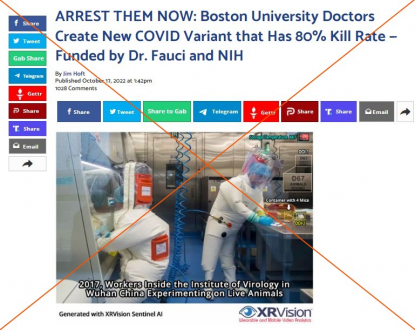 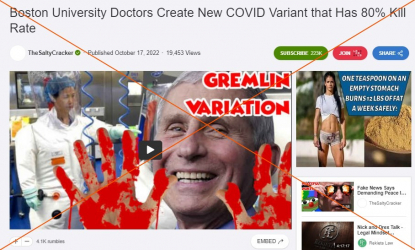 "THIS IS SICKENING!" says an October 19 tweet. "The world hasn't yet fully recovered from the pandemic, and yet, scientist have created a deadlier strain of the Corona Virus strains. WHY?"

Other articles repeating the claim highlighted concerns about the still-unresolved question of the origin of Covid-19 pandemic. Reports have found SARS-CoV-2 jumped to people from animals at a market in Wuhan, China, but the theory of a potential laboratory leak remains given a lack of definitive evidence.

Boston University (BU) sent a statement to AFP on October 18 saying the Daily Mail and others misinterpreted its research, which was released as a pre-print.

"The news reports pulled one line from the paper's abstract out of context," said Ronald Corley, director of the BU National Emerging Infectious Diseases Laboratory (NEIDL), in an October 17 post on the university's website.

AFP reached out to the Daily Mail for comment, but a response was not forthcoming.

What did researchers do?​

The BU study focused on the highly transmissible Omicron variant of the coronavirus, with the objective of determining whether its spike protein explains why it causes less severe disease.

The study focused on the Omicron spike protein because it carries a large number of mutations and seems to help the virus escape vaccine-induced immunity. Researchers took the gene for Omicron's spike (S) and added it to the genome of the SARS-CoV-2 strain first seen in the US state of Washington in early 2020, creating a new iteration of the virus.

The university said the study began in tissue culture and then moved to an animal model that used mice engineered to be highly susceptible to the coronavirus. No tests were conducted on people.

The researchers concluded that the spike protein was not the key factor in why Omicron is less deadly, saying other viral proteins needed to be examined, according to the university.

"Determination of those proteins will lead to better diagnostics and disease management strategies," said Mohsan Saeed, a NEIDL investigator, in BU's October 17 post.

The social media claims focus on the fact that while Omicron caused mild, non-fatal infections in the mice, the virus created for the study killed 8 in 10 of them.

BU said: "That 80 percent number is what the media reports latched onto, misrepresenting the study and its goals."

The university said the virus created with the Omicron spike was not more deadly than the Washington SARS-CoV-2 strain. In fact, "this research made the virus replicate less dangerous," BU said in its statement.

Craig Wilen, a Yale School of Medicine professor who has studied Covid-19, agreed.

Based on the preliminary research report, Wilen said on October 19 that the modified virus "was less deadly and less pathogenic in mice, and it gave us important information."

He said the details show the original, non-modified SARS-CoV-2 strain "kills 100 percent of mice" and that the researchers "made it less pathogenic."

There was little reason to think such an experiment would have dangerous outcomes, according to Victor DiRita, chair of Michigan State University's Department of Microbiology and Molecular Genetics.

"The investigators were not putting the protein into a completely different virus, rather they were asking nuanced questions using closely related lineages," he told AFP in an October 19 email.

Arturo Casadevall, chair of molecular microbiology and immunology at Johns Hopkins University, said on October 19 that the research was "reasonable" and did not create a deadly new strain.

"They took a part of the Omicron code which was already circulating and put it on a virus which has already been tested on much of humanity," he said.

Gain-of-function research is controversial. Funding for certain types of such work was paused by the US government in 2014, although the restriction was lifted in 2017 and new protocols developed.

If the research involves "potential pandemic pathogens" -- or bacteria and viruses that are likely highly transmissible -- it requires increased oversight from the Department of Health and Human Services.

BU said its research should not be considered "gain of function" because "it did not amplify the Washington state SARS-CoV-2 virus strain or make it more dangerous."

Some scientists questioned this and said the researchers should have disclosed more details.

Epidemiologist Marc Lipsitch of the Harvard School of Public Health said in a Twitter thread that he considers the research "gain of function" that should have been disclosed. However, his "bottom line" assessment was that "there is at least a reasonable risk-benefit argument in their favor, if done in proper biocontainment."

BU's statement said the research "was reviewed and approved by the Institutional Biosafety Committee (IBC), which consists of scientists as well as local community members."

DiRita, who is also the former president of the American Society for Microbiology, said: "It appears that they maintained strict and appropriate biosafety-level 3 precautions."

However, in a statement emailed to AFP on October 21, the US National Institute of Allergy and Infectious Diseases (NIAID), part of the National Institutes of Health (NIH), said it was "examining the matter to determine whether the research conducted was subject to the NIH Grants Policy Statement."

BU said on October 18 that it "fulfilled all required regulatory obligations and protocols," adding that if there had been evidence that the research was gaining function, its protocols would have caused the project to "stop and report."

Yale's Wilen said this type of research is common in virology.

"This is research that has been done for many years for many viruses," Wilen said. "The entire purpose is to identify specific parts of the virus, such as how the virus evades the immune system."

He said he does not consider the research "gain of function" that would make the virus more deadly.

"They fundamentally did not give the virus a new property," Wilen said. "These are two viruses that are very similar."

To make it more dangerous "you would have to give it a new function without impairing another function," he said.

AFP has fact-checked other misleading and inaccurate claims about Covid-19 here. 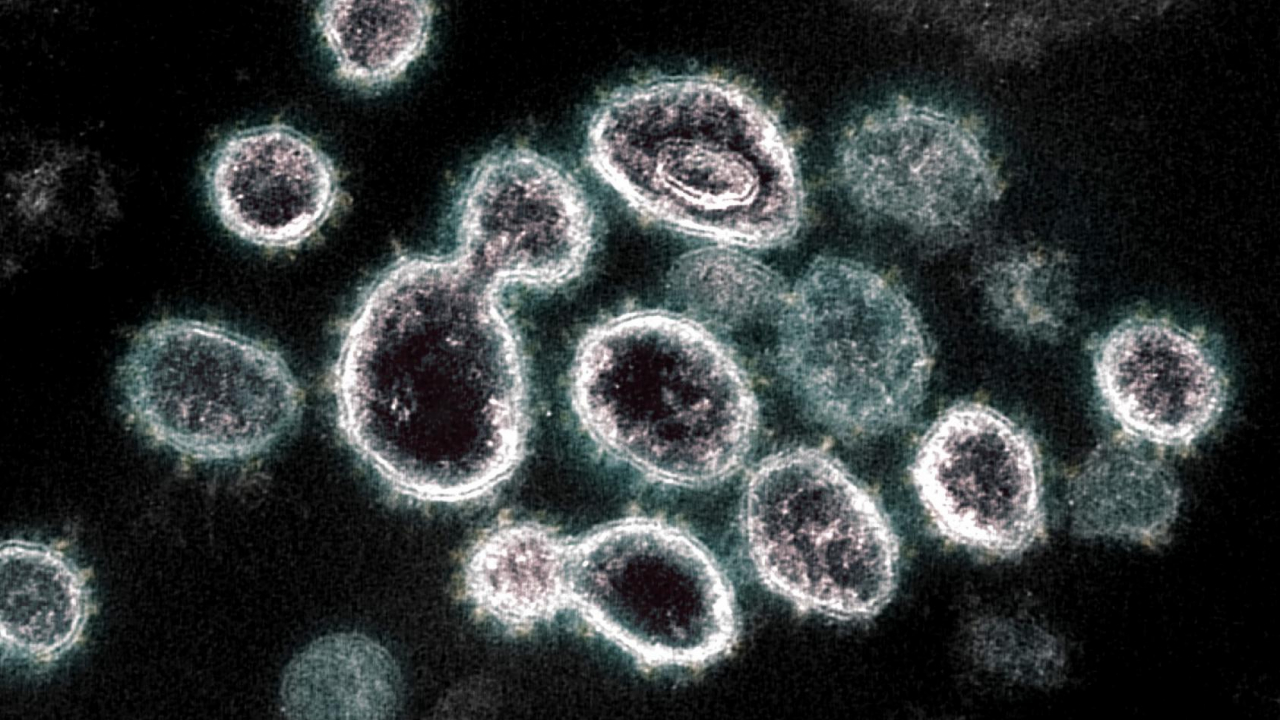 Social media posts shared tens of thousands of times claim researchers at Boston University have created a new, more deadly variant of the coronavirus. But the university’s scientists say this is a misinterpretation of their study, which was released ahead of peer review -- and independent...