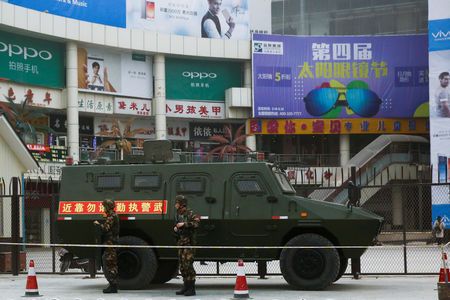 More
BEIJING (Reuters) - China urged the United States on Wednesday to abandon its "prejudice" over Xinjiang, as the Trump administration considers sanctions against Chinese officials and companies linked to allegations of human rights abuses in the Chinese region.

Discussions have gained momentum within the U.S. government over possible economic penalties in response to reports of mass detentions of ethnic Uighurs and other Muslims in the far western region, which have prompted a growing international outcry.

Any sanctions decision would be a rare move on human rights grounds by U.S. President Donald Trump against China, with which he has engaged in a trade war while also seeking Beijing's help to resolve a standoff over North Korea's nuclear weapons.

The U.S. State Department said it had received a letter from a bipartisan group of U.S. lawmakers at the end of August asking Secretary of State Mike Pompeo to impose sanctions on a number of Chinese officials accused of overseeing the policies in Xinjiang.

Those included Chen Quanguo, Communist Party chief in Xinjiang and also a member of the politburo, one of the party's top decision making bodies.

"If the media report is correct, we urge the relevant side to respect the facts, abandon prejudice, and stop doing and saying things that harm Sino-U.S. mutual trust and cooperation," Geng said, referring to news reports on the U.S. deliberations.

Geng added that all people in China "fully enjoy freedom of religion in accordance with the law".

Beijing has said Xinjiang faces a serious threat from Islamist militants and separatists who plot attacks and stir up tension between the Uighur minority who call the region home and members of the ethnic Han Chinese majority.

Chen made his mark swiftly after taking the top post in Xinjiang in 2016, with mass "anti-terror" rallies conducted in the region's largest cities involving tens of thousands of paramilitary troops and police.

One of his most visible initiatives has been to build thousands of grid-style police checkpoints across Xinjiang, and human rights advocates have decried martial law conditions and mass DNA collection.

Last month, a U.N. rights panel said it had received credible reports that up to one million ethnic Uighurs may be held in extra-legal detention camps in Xinjiang, and called for them to be freed.

U.S. sanctions could be imposed under the Global Magnitsky Act, a federal law that allows the U.S. government to target human rights violators around the world with freezes on any U.S. assets, U.S. travel bans, and prohibitions on Americans doing business with them.

"It's fortunate that China is so strong that those forces foolishly clamouring can only add a bit of pressure from public opinion, but their dream of long-arm jurisdiction is in the end a mirage," the paper said.